I thought I'd at least try to get out the Hodgepodge & Friday Fragments out this week!  That's about the best I can do right now!

~  Thanksgiving was a success.  We didn't really do anything while we were at BIL & SIL's house.  Saturday was a day of football.  All. Day. Long.  Which wasn't a problem for me at all.  It was pretty neat to see 2 Small Town boys celebrating after 1 of them made a touchdown.  #89 graduated with MS, and the other graduated the year after. 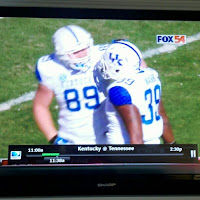 Friday we had lunch at a German Restaurant.  Pretty good food, ditzy waitress.  CH looked at her and said, "You're from Southern Germany, right?"  To which she said, "No, I'm not from Germany at all."  (NS, Sherlock.  Thanks for clearing that up.)  It didn't get much better after that.  I won't even go into my MIL swiping some brown bread and putting it in her purse for later. 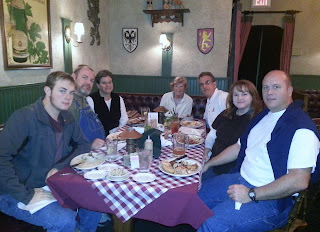 ~ There is one class at one of my schools that has 6 speech students in it.  Tuesday, only 2 were there.  The flu & stomach bug is hitting hard, y'all.

~ Tomorrow is December 1st.  Does anybody have any idea where November went?

~  I'll probably put the Christmas decorations up this weekend.  There will be no strike for me this year.  (Last year I did NOTHING...no decorating, no candy making for the boys, no stockings.)  Hopefully the boys will appreciate it a little more this year.  Highly unlikely, but I can still hope.

~  My phone completely went wacko last weekend, so I'm back to a "regular" phone until we can find one.  We went to the cell store on Sunday and bought a used phone, but it froze while trying to download an app, so I took it back.  It's amazing what people will do for a phone:  the salesman said that someone had traded in a minivan for an iPhone 4.  Ridiculous.

~ The drive into work this morning was...magnificent.  The sunrise against the mountains was GORGEOUS.  I wanted to stop & take pictures, but that would've made me late, and I didn't have my camera with me.  I doubt if the picture would have done it justice.  The pink sunrise against purple mountains:  breathtaking!
Email ThisBlogThis!Share to TwitterShare to FacebookShare to Pinterest