All in all, a pretty good weekend!  I got most of the house clean, all of the laundry done, watched some football, did a little reading, and even went grocery shopping.

Many of my commenters said that they wanted to know about the pigeon:  The teacher let him go on Saturday, and he made it home that afternoon.  I'm not sure how long it took him to get there.

The first playoff high school football game was...weird.  CH said that the team came out very flat.  We're #1 in our bracket, and were playing the #8 team.  They scored first, but missed the extra point.  During the game, one of their players kicked one of ours in the privates.  I saw our guy down, but then I saw him get up and start to go after the other guy.  Then I saw our coach, a couple of players, and our trainer drag him off the field.  The other guy was ejected from the game.  We ended up winning by about 10 points, but that other team came to play...dirty or not.  At one point, I looked over to the visitor's side and it hit me:  this was the same school that I saw MS play for his first high school soccer game.  And, I remember being appalled at the parents' behavior.  After that, I could see why fights among parents happen at soccer games.  Playoff game #2 is this Friday...hopefully the team will come out ready to play, and win.
Before the game, the Seniors from the football team, girls' soccer, cheerleading, cross country, and band were recognized.  They kids were given a certificate of appreciation, and the moms received a rose.  Here are a couple of pictures: 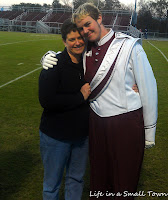 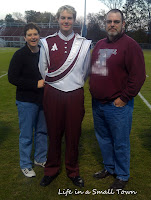 More football on Saturday.  I have no idea what's going on with UT's football team, but it doesn't help when former players (who weren't very popular to begin with) start calling for the head football coach's resignation before the end of the season.  That can't be good for team morale.  Here's the way I see it:  Dooley still has holdover recruits from "He who shall not be named".  I think they should give him a chance and see how it goes with just his recruits.  I really, really like Dooley, and I think he's done good things for the program, especially with behavior expectations.  I'm just glad they pulled it out...it wasn't pretty, but they did it.  Give Troy credit...I don't think they got the memo that it wasn't suppose to be a good game.

Then there was the Alabama-LSU game.  Somebody had to win, right?  We have ties to 'Bama, so I was pulling for them.  What. A. Game!  Enough said.

I did my Suzy Homemaker duties this weekend:  Pumpkin Spice Muffins on Saturday, dinner on Saturday, and cookies on Sunday so YS would have some for his lunch.  I cleaned some on Saturday, some yesterday.

I even managed to sneak in some flute practicing.  The flute choir has a concert coming up on 08 December. The difference between playing in a band and playing in a choir is that if you mess up in a band, it's not that noticeable.  BUT, if you mess up in flute choir, you stick out like a sore thumb.  I'm just hoping I'll be very comfortable with the bass flute by next practice.  I think it'll be old hat by next time.

Last night was the season finale of "Call the Midwife".  Right before it came on, they advertised "Doc Martin" as being on PBS Thursday nights at 9:00!  I absolutely LOVE that show!   "Downton Abbey" comes on in January!