~  Did you see my countdown ticker???  3 1/2 weeks until my big trip!  It seems when I first put the ticker on my blog I was a little anxious...I had down that we were leaving a week before we are!

~  We do only have 2 more Mondays before we're out for the summer.  I'm not counting the 20th, because it's considered a half-day for the students. The buses don't run, and the kids that do come in only come in to get their report cards.

~  Wow.  This year really flew!  It's hard to believe that I only have 2 more weeks with my students, and not even that much with some of them.  My kindergarten students will be hit or miss since they'll be practicing for Kindergarten Graduation.

~  All of the state tests are over, thank goodness.  Last week the 3rd through 5th grade completed theirs, then 1st & 2nd did theirs this week.  AND, 3rd through 5th also had another test to take this past Wednesday.  It's all downhill from here!

~  YS' band banquet went very nicely.  The mom that decorates every year did a nautical theme since the band trip was a cruise this year.  She always does such a nice job with it.  She's one of the moms that I'm really going to miss. 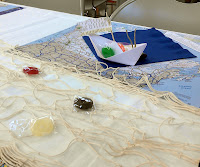 ~  YS was awarded the "Aaron Copland Award" for most outstanding band student.  He was surprised by it; he didn't think he was going to get it!  The really cool thing is that when I was a senior, I got the "John Philip Sousa Award", which is the same award, different name.  He received a trophy to keep, and his name is on a plaque along with the recipients from past years. 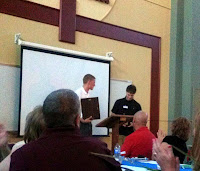 ~  Oh, and YS has had a change of heart:  He's decided to go to the small university he originally planned on attending instead of the community college.  At this point, I think he's making a good choice.  Either one would be good, but I think he's ready to fly the coop and find his place in the world!

~  YS asked yesterday if, after he's at college,  he could go into a big city that's about an hour away from where he'll be going to school.  I told him that I was going to tell him what my mama told me when I left for college:  I don't know what you're doing when you're at school.  But then CH & I added that it would be nice if he would let us know when he leaves campus.

~  Check out this beautiful card I received from Jeanne: 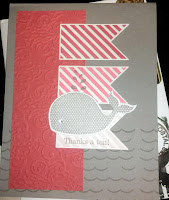 I am so honored to receive one of her cards!  If you don't know Jeanne, stop by and see some of her amazing cards that she makes herself.  I'm in total and complete awe of her creativeness!

~  If you see "Iron Man 3", pay close attention the newspaper that is shown in one of the scenes:  It's the Small County's newspaper!  I didn't get a chance to read the whole article, but the makers of the film wanted a newspaper from this area of the country, and they chose ours.  There's a bit of trivia for you!

~  Have a great weekend!
Email ThisBlogThis!Share to TwitterShare to FacebookShare to Pinterest