~  I have been the worst possible blogger lately.  I haven't called, I haven't visited, I haven't written much.  There's just too much going on.

~  We went camping a few weeks ago with the teardrop & tiny trailer group.  We had some rain, but it wasn't a total wash out.  Our new easy-up worked great and helped us stay dry.

Some of the ladies taught me how to play Rummikub.  Apparently it's in the camper's handbook.

~  We got these super cute bags from the PTO for Teacher's Appreciation Week: 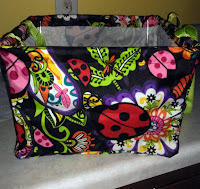 ~  One of the Kindergarten Classes had this on the wall during the last few weeks of school: 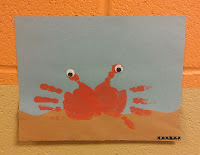 ~  One of my sisters made this for my mom on Mother's Day:

Yes, I said "made".  This sister also had the honor of having one of her baskets hold goodies that was given to one of the Supreme Court Justices when she visited the big university that is nearby.

~  There's a sinkhole in the parking lot of my mountain school, and it's very close to my room.  I told the custodians to make sure nothing happens to my room, because I have a lot of money in materials in there. 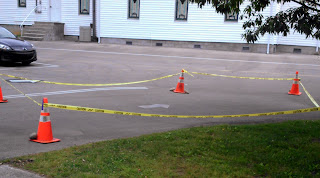 The School Resource Officer asked me what kind of games, and I told him I had board games.  Then, he asked what kind of board games, and I said the first one that came to my mind (which was what we played last week).  I can't believe out of all of the games I have on my shelf, I chose to tell the police officer "Pop the Pig".  The year isn't complete until I've totally put my foot in my mouth!  He was a good sport about it, and said something about it sounding like I had some pent up anger for policemen.

~  There was another duck on the road that had been hit by a car.  A couple of days later, I stopped because of this little guy: 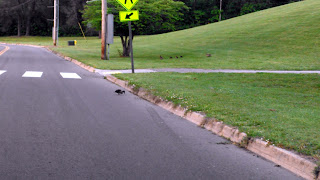 You can see the rest of his siblings in the grass, but this one must be the adventurer of the group.  He finally hopped back on the curb, and I watched mama corral him with the others.  While I was waiting, 2 cars went around me.  No wonder the ducks are getting hit.  Some people are such jerks.

~  I have everything ready for our trip.  Now I just have to wash clothes, pack, and make sure YS is packed and ready go to.

~  We didn't realize until last Friday that YS only had 1 spare pair of contacts, and Laika had chewed up his glasses.  He was able to get in with the eye dr. right away, ordered some new lenses for some old frames, and I got online and ordered some contacts.  He glasses were ready on Tuesday, and his contacts came in yesterday.  I was sweating it since it's a holiday weekend and there won't be any deliveries on Monday.

~  Is anybody else watching Chicago Fire?  CH & I started watching the season through On Demand, and I'm hooked.  Like I need another show to watch!

~  Have a good weekend!
Email ThisBlogThis!Share to TwitterShare to FacebookShare to Pinterest
Labels: friday fragments