I'm so glad last weekend is OVER!  Last week was our last full week of school, so work was busy with finishing things up, getting progress reports ready and in teachers' mailboxes, and getting my rooms cleaned up.  Thursday was a late night:  flute choir practice in a town 45 minutes away.  We had our dress rehearsal in the church where our director is a member, which is also where we had our concert.  We had a long, hard practice.  We usually practice for 2 hours; Thursday's practice was right around 3 1/2 hours with no substantial breaks.  I didn't get home until around 11:00.

At school on Friday morning, my new school had Kindergarten Graduation.  One of my sister's (the one that gives me stuff!) grandsons was in the ceremony.  That was the first time anyone in my family has seen where I work, so it was really neat.  She took a couple of pictures while she was there: 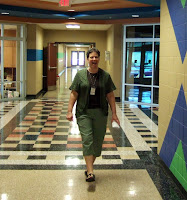 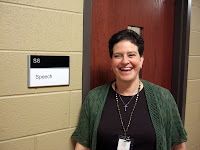 Hmmm...it would appear that I have my mouth open a lot.  The ceremony was adorable:  they went through the months of the school year, and one of the teachers had a rhyme for what they focused on that month.  Then, the kids performed a song that went with what they had learned.

Friday was YS' high school graduation.  Luckily I had thought ahead and picked up the cake and other food for our little family reception on Thursday.  After already going through it 2 times, I learned how to not get stressed!  A few pictures from before the ceremony:

CH, BIL, and their aunt

CH, MS, and his girlfriend

BIL, SIL, and me (with my mouth open yet again!)

Getting ready to get his diploma 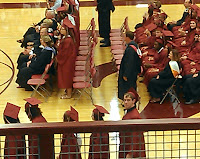 BIL, CH, and their uncle

YS with great aunt & uncle, photobombed by SIL & BIL (kind of scary that they both had the same idea & the same face!)

YS with my parents 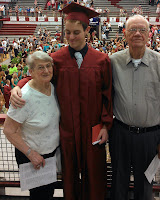 YS with his proud parents (photobombed by grandpa!)

YS with his 4th grade teacher, who was his first teacher in the Small Town

Display for his family reception

MS comparing senior pictures to see whose is better.  We think YS won.

YS stayed at his reception until people started leaving, then he and some friends went over to another friend's house for a bonfire.

Saturday, I was gone almost all day for my flute choir concert.  It was also CH & my 29th Wedding Anniversary.  We usually go to a local restaurant and use the "complimentary dinner for 2" coupon that Ms. Principal gives us for Christmas, but we weren't hungry enough to use it, so we just went to a local brewery.

Sunday morning, the church had a Mass to honor the graduates.  YS didn't want to go to Baccalaureate, and (again, after sitting through 2, I learned not to fight it!) he said he would go to the Mass.  I thought that was a pretty good trade! During Mass, a couple of graduates from the Rival School read the readings, and one graduate from each school (there were 4 represented) took up the gifts.  Well, except for the Rival School; YS said that person forgot.  Since YS was the only one from Small Town, he got to participate in that.  (There was actually another boy who graduated from ST, but he plays guitar in the choir.) 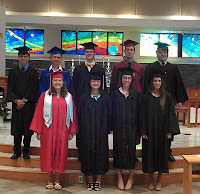 After mass, there was a nice little brunch for them.

Now I can start thinking about our trip!