This past weekend was kind of boring.  I didn't do much except for laundry and catching up on some blog reading from bloggers who participated in the A to Z Challenge last month.  We also went to Gander Mountain and bought a new EZ Up, along with a couple of camping towels for YS & I to use on our big trip, which, by the way, is in 3 weeks & 1 day!

So, I thought I'd talk about last weekend.  We went camping!  (Surprise, surprise!)  We went to a campground not far from Nashville, and met a group of people from the "Tear Jerkers" group.  This is a group of people who own teardrop and small campers. 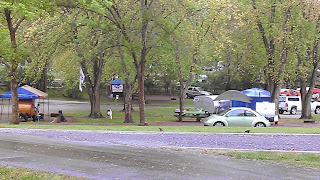 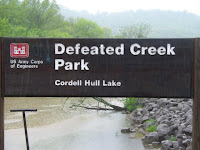 We got there Friday evening, and set up our campsite. 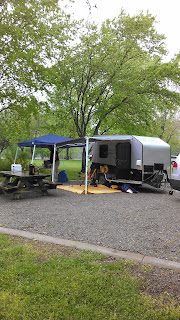 By the time we were ready to join everybody, some people were ready to call it a night and go back to their campers.  We sat around for a little bit and listened in to some music.  A few of the men are excellent guitar players/storytellers, so it was enjoyable.

Saturday morning started out a little rainy.  Just some drizzle, nothing really major.  I posted this picture on Instagram with the caption:  A rainy day camping is better than a sunny day at home doing laundry!  Little did I know what was coming. 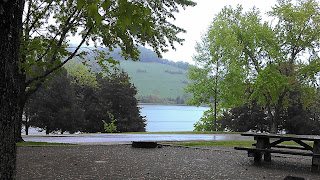 We spent a good part of the day in the camper, reading, napping, and snacking.

Laika was a perfect camping dog, again.  She was content to stay in the camper and sleep.  We were able to get her out during a break in the rain and let her meet a new friend, a Mountain Cur.  Luckily, she liked to chase, because Laika likes to be chased.

Even though we had the Easy Up and the awning, our chairs still got soaked.  Lesson learned:  put the chairs in the construction-sized plastic bags we have.

I really was okay with the rain.  There were breaks when we were able to get out and walk around & do some visiting.  The bad thing was that my pant legs got wet, and my feet, so I was cold.  That's no thanks to the shower I took that morning.  I bypassed the old bathhouse to go to the new one, thinking that was the better choice.  I'm convinced a man designed the showers!  When you walk into the stall, there's a bench.  So far, so good.  Then, there's a little partition where the shower is.  Still good.  Now for the shower:  to turn it on, you push a button.  There's no regulating the temperature, which I understand because it's a government campground, and the water was okay.  Not hot, but bearable.  The shower head was positioned so that the water flowed straight down.  Great water pressure, but to wash my hair, I had to squat down.  Then, there was the problem of the water not turning off when you want it to.  I went ahead and walked back to the section that had a bench, but the water was still going full blast and there was no way I could get completely dry, much less put my pants on without the bottoms getting wet.  I suppose I could've stood on the bench, but my bag was on there, so it would've been kind of hard to do.  Plus, there would've been the danger of me slipping when I got down.  If the partition would've been just a little bit farther out, I think it would have been okay.

I did get a kick out of the posters on the bathroom stalls.  Since the campground is run by the Army  Corps of Engineers, there were plenty of reminders to be safe: 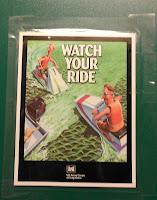 Saturday night, we had a pot-luck dinner at the pavilion.  I think the original plan was to have it at a campsite, but since it had been raining we opted for a shelter.  These people know how to cook! 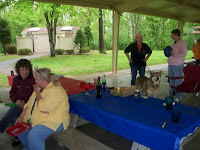 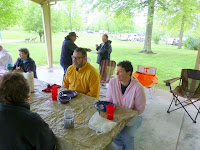 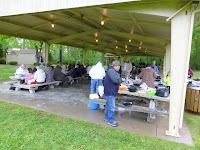 Before the party broke up, there was more pickin' & grinnin'. 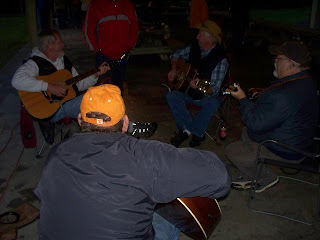 The above pictures are not mine.  Some of the group that we were with took them and shared them!
That night, we had some storms.  It stormed so badly that Laika got into her bed (at the foot of our bed) and put her head under the bed.  I woke up a couple of times, but went right back to sleep.  In the morning, the only casualty we had was our Easy Up, which was okay because we had only paid $50 for it, and we used it on a couple of camping trips, plus the week long trip in the Keys.  So, we had gotten our money's worth out of it.  And, it gave CH a good excuse for buying this: 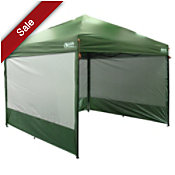 When I said "the only casualty", I meant for us.  Around 8:00 Sunday morning, I saw a couple of people from our group leaving.  And then I saw them come back.  I went down and asked one of them what was going on, and she said that the bridge washed out.  That bridge is the only way in and out of the campground.  When we rolled in on Friday, we had to go across a 1-lane bridge that was mostly dirt.  They did an excellent job of getting the bridge travel-ready in just a couple of hours.

(Not my picture!)
We took our time packing up, and then got to go down and see this unique camper (which was a part of our group): 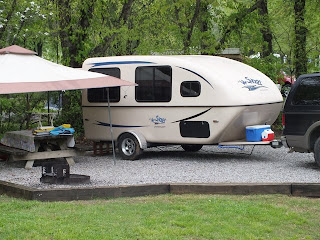 (Still not my picture!)
We dubbed it "The Brown Bullet".  The owners said that the company that makes it only has about 4 people making the campers; their camper is something like #148.  I told CH that if we didn't have our camper, that's the one I would want.  If you want to see what it looks like inside, you can go here.  One downside:  it costs almost twice as much as our little camper, but it does come with a bathroom and some cabinet space.

Even with the rain, we had a good time.  This seems like a great group of people to run with.  There are people from all walks of life in this group, and it's pretty fun to sit around and talk to people.  Next time, though, I'm going to make sure I have rain boots! 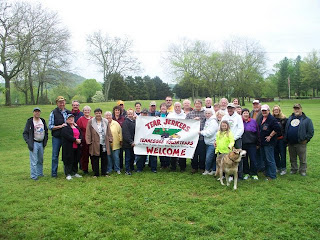