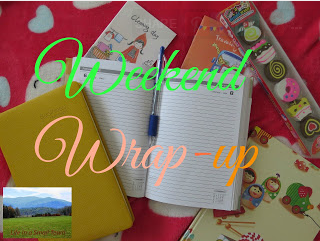 I kicked off my weekend by going by the church and going through the outdoor Stations of the Cross. It was a little chilly; I was glad I had my jacket with me. One of our parishioners completed this as his Eagle Scout project. He did an excellent job with it. The pictures he used for each Station are very nice.

CH & I had a quiet Friday night. We went to our "new and improved" Captain D's for supper (it was a Friday during Lent!). They've remodeled it so it's now bright and cheerful. I did have a quick thought that I need to tell Daddy about it. 😔

Saturday, we were up early to drive a couple of hours to the town where we met. (Which had nothing to do with why we were there!) YS has been taking HEMA (Historical European Martial Arts) Fencing Lessons for the past 6 months. There were the "Highland Games" that were held. This was a very small event; we have a private college in town that puts on a good-sized game in the Spring. For YS' first outing, he did pretty well!

He's waiting for his gear to come in, so his shoulder has a pretty good bruise on it from getting hit. I thought we were going to be in a nice warm gym, but we were outside. And, it was cold! (Again, I was glad I had my jacket!)


There were women's events: 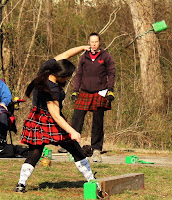 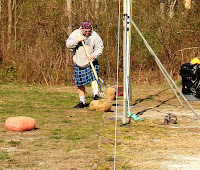 Even the kids got in on some events:

This guy was my favorite (we dubbed him: Viking guy!):

It seemed like a very friendly competition; after the fighting, everyone talked, gave each other tips, and just socialized. I think YS had a good time.
CH & I couldn't be where we met without visiting some old haunts. The place where it all started:

The building in back of us used to be the fraternity house were I was a little sister for 3 years; CH was a brother during fall semester of my senior year. It's a family home, now. I was so very tempted to go up and stand on the porch! I spent many hours on that porch!

We went by Pals, grabbed some burgers, and sat at the amphitheater on campus while we ate. This is a popular place for students to picnic and/or study when the weather is warm. (I don't remember ever doing that, though; too many distractions for me!) The students are on Spring Break, so it was quiet.
Saturday night, we started watching the series Underground. The show is about the Underground Railroad. Very good, and heartbreaking.
Sunday was the grocery store, a quick trip to our favorite watering hole, The Casual Pint, then just piddling around the house.
Nice end to the weekend!  Have a great week!!!