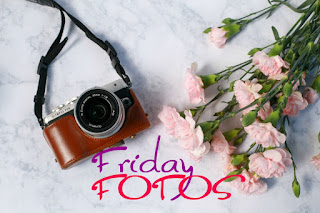 Deb at Breathing in Grace hosts this linky most Fridays. I take it as an opportunity to let y'all know what's going on during the week in the Small Town.
Last Friday, I received a phone call from a tree service that I hired a month and a half ago. I almost called him on Thursday to ask if he was going to be able to trim our trees, because if he wasn't, we were going to have to pay someone else just a little more to get it done. We had a branch from the hickory tree outside of our living room window that was pushing against the window. The guy called on Friday and said that they were about 45 minutes from being finished with a job not far from me, so if I was going to be home, they would come by and clean the trees. I wasn't about to tell him 'no', so they came and conquered.
It turned out to be an extremely good thing, because we had a horrendous storm on Saturday night. Big oak trees fell, and many fell on power lines and houses. I drove by my parents' house before Mass on Sunday, not expecting to see anything. I was in for a surprise:
It was heartbreaking to see this tree on the ground. Daddy landscaped the area below it; he even won a beautification award for it & had an article in the newspaper. And, my brother spent a lot of time cleaning and weeding that area out the day before (I think it was). Luckily, it just missed the house. That is no exaggeration, either.
None of us expected to spend our Memorial Day weekend cleaning up. A guy drove by on Sunday and asked if he could have the wood. He was told that if he sawed it, he could have it. He spent most of the day Sunday and Monday sawing and loading up the wood. As it turned out, he was the son of 1 (or more) of my sibling's classmates.  (Small town, remember?)

Just to give an example of how close the tree came to the house:
And just how old the tree was:
So, how did the landscaping and trunk get turned over?  Funny you should ask! CH got to play with his winch. It actually came in pretty handy to have a redneck for a husband! 😉
Our house was fine; we were only without power until Sunday around 2:00. I wasn't going to complain about not having internet knowing people were without power! The good thing was that it wasn't humid, or very hot over the weekend.
CH had another chance to use his winch to pull down our next-door-neighbor's top of a tree that was stuck.
I shot these pictures one evening as I sat on the couch. These pictures all have the same settings. Every time I sat down and looked out, the colors changed.
I tried a new recipe: Steak Burrito Bowl from Six Sisters' Stuff. This is definitely a keeper! This is one of the few times CH and YS have had no suggestions of add-ins or changes to make a dish taste better. YS did the staging for me.
After 5 years, the radio in my car was having issues. First it was the bluetooth. Kia said that there was an update that messed it up with Androids. Great. It wasn't under warranty any longer, and it was suggested that another radio (not a stock radio) would be less expensive than if the dealership put one in. Lately, my radio was just resetting by itself. Yeah, it was pretty aggravating! At CH's suggestion, I went to the place that he's used a couple of times and he hooked me up with a new radio.
You don't realize how much you appreciate bluetooth until you don't have it. Not having a hands-free radio was not fun. AND, I got 3 free months of SiriusXM, which I had canceled a couple of months ago.
And...that's it. Finally! It's been a busy week, and next week is going to be just as busy, if not busier. I'm going to try to rest up this weekend and hopefully get a 2nd wind!