{State of the Kitchen} Part 4: What a Difference! 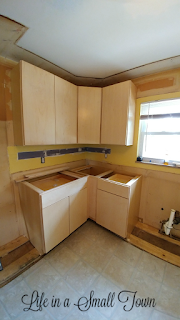 Things really started hopping on Monday. The contractor called me Friday afternoon to let me know demo would start on Monday. Sure enough, the demo guy was at the house that morning, ready to get started. He had to do it by himself, but he was very efficient and managed to get it all done before he left.
I was holding my breath as he started. With the house being 55 years old, there was no telling what he was going to find.
When he took down the cabinets over the cooktop, he said that they bolted the cabinets into the beams, which is how it should be done. WHEW! That was 1 area of concern.
Who am I kidding? It was ALL a concern! The demo guy is a firefighter who has a cabinet business on his days off. He mentioned that it was a good thing we were remodeling now...before we had a fire. The wire to the garbage disposal had just been laid over the cabinet frame (instead of a hole being drilled through the frame). The wire had frayed and had arched...there was a burnt place on the frame. That was a bit scary, but it was the worst thing he found.

Everything was dumped off of the back porch to be removed the next morning:
True to their word, it was gone the next morning!
The electrician/plumber came on Tuesday to get everything up to code, ready for inspection on Wednesday morning. Wednesday morning, the cabinet guy opened all of the boxes and we inspected the cabinets. At first glance, there were a couple of things that aren't up to par.
As CH started looking closer at things, he found some things that will need to be replaced, like 12 of the doors. They should all be smooth, but some feel like they weren't sanded enough because they have rough spots. So, those will all be going back, along with the top drawer of a drawer cabinet. It had some chips in it which I didn't see before because it was still in plastic.
The cabinet guy started putting in the cabinets, which was really exciting!
He got 1 corner done before the inspector came to inspect the electricity:
Except for 1 minor mistake which is easily remedied, we passed inspection!
The cabinets for the pantry were put in, but they'll have to be redone because they aren't centered. I hate it for him, but it needs to be right.
CH also looked at the drawers in the base cabinets. The top drawers have gaps in them on one side...not good.
Another disappointment was the pantry cabinet. I wanted to put my microwave in there, but the cabinet we received isn't wide enough. I don't feel comfortable with the cabinet guy trimming part of the opening to make it fit. We have a few more inches in the area where it's going to go, but I'm not sure what the next size is.
Since we have plans to extend the back wall a couple of feet but are keeping the current flooring, there's a strip of floor that is of concern (see above picture just to the left of the cabinet). We were told by the designer that the contractor would take care of that; the contractor didn't know about it.
I'm not going to lie...this was a hard post to finish because yesterday was a rollercoaster day. I was so excited to see the cabinets going in that I was blind to the irregularities. We're paying a lot of money for this, so we want it to be as perfect as it can be.
I don't know what I was expecting; I guess I was expecting things to go so smoothly without any crisis. The quality of the cabinets is a bit disappointing, but it is better than what we've ever had, for sure. Even with 2 new houses in our past, these are better quality.
On top of everything else, I threw my back out on Saturday & am not 100% yet, so I'm not really able to get out of the house for an extended amount of time. (Gotta stay close to the ice pack!) I realize we really just started, but I'm so ready for this to be done!

10:21 a.m. update: With the cabinets not being the quality we were told they would be, we're at a standstill. We were told the doors would be all wood (they aren't), that we would have plywood ends (they all aren't), and that there would be nails...no staples (there are staples). Next step (before the cabinet guy comes back in) is to go down and talk to the kitchen design manager at Home Depot & voice our displeasure at the quality of the cabinets.  They're Thomasville, so we expected much better quality. Yes, we're extremely disappointed because this means we're without a kitchen longer than we anticipated, but with the small fortune we're paying, it needs to be remedied.
Email ThisBlogThis!Share to TwitterShare to FacebookShare to Pinterest
Labels: home improvement, kitchen, State of the Kitchen