{State of the Kitchen} Part 6: Getting Ridiculous 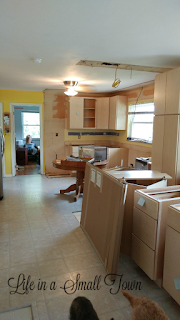 I didn't even take any pictures of my kitchen this week, because it looks exactly like it did last week. To say that I'm displeased is a huge understatement.
The designer at Home Depot told me on Sunday that I needed to make another payment before they would start work again. (It would have been nice to have known that earlier, but whatever.) My daddy always told me that you don't pay for services until they have been rendered. That's not the way it works at Home Depot (and, I'm assuming Lowe's is the same way). She explained it like this (not her exact words, but how I interpret): The customer puts money into an account at Home Depot. The contractor invoices the work and is paid by HD. If there's no money in the account, the contractor doesn't get his money. After reminding the designer about how nervous this makes me, she assured me that HD guarantees the work and there will be a waiver to sign at the end of the project. If I'm not satisfied, I don't sign the waiver until I am satisfied.
I waited for the contractor to call on Monday, but he didn't call, so I called him on Tues. to see about a re-start date. I realize next week is a holiday week and that some of the crew may be taking the week off. I was hoping someone could come in this week and do something...anything to get things going, but apparently that's not going to happen. Looks like the 11th is the re-start date. I go back to work on the 26th, and I told the designer that I wanted it all done by then because I can't take off work to sit at the house while they work. (Home Depot has in their contract that an adult is supposed to be at home while work is going on.) So, they'd better hustle once they get re-started.
The original finish date was July 5th, now it's 3 weeks later. This is a project that was only supposed to take 2 weeks. When we initially met with the designer, she said that they didn't want us to be without a kitchen any longer than was necessary. We had the issues with the cabinets, so that halted construction, but (at the risk of sounding like a diva) I honestly think that we should be pushed to the front of the line & other projects be pushed back. It's been a week since we met with the Thomasville Rep & the contractor, and nothing at all has been done since. The last installment was paid on Sunday, and the designer said she emailed the contractor that day. If I hadn't called him on Tuesday, I have no doubt I would still be waiting for a call.
The contractor did say that he was going to speak with the cabinet guy on Wed. to see what his schedule was like next week. I'm hoping the cabinet guy will come through for us and get something...anything done. I don't know if the contractor talked to him, because he didn't call me like he said he was going to.
The new utility cabinet (next size up so the microwave will fit in it) will be delivered to the store on the 11th, but the Cabinet Guy said he can work around it not being ready to be installed, and the countertop people don't need for it to be in to measure.
That strip in the floor and the ceiling? The contractor is not going to charge us for that. His mistake, not ours, so we shouldn't have to pay for that.

This is not how I wanted nor expected to spend my entire summer. I originally thought that by this time I would be waiting for my countertops to be installed. The frustration has my emotions going crazy. I just want this to be done so I can cook and use my dishwasher & have water in the kitchen.

Email ThisBlogThis!Share to TwitterShare to FacebookShare to Pinterest
Labels: home improvement, kitchen, State of the Kitchen