{State of the Kitchen} Part 7: Over It 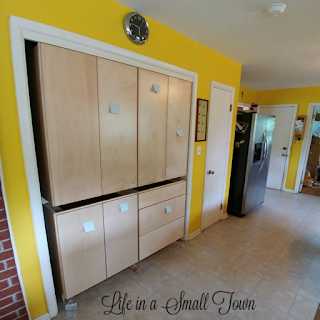 If you've kept up with these "State of the Kitchen" posts, you may feel as if you're stuck in something similar to the "Groundhog" movie. We are now in Week 3 of nothing being done. My cabinets have been sitting on my kitchen floor for 28 days. 28 days, y'all.
Last Thursday, I showed CH the cabinet that CG (cabinet guy) said I could start loading up. Then I showed him a cabinet next to it that needs to wait because the utility cabinet is going to be next to it. This is what he noticed (you may have to click on the picture for a better view):