{State of the Kitchen} Part 8: Getting Restarted 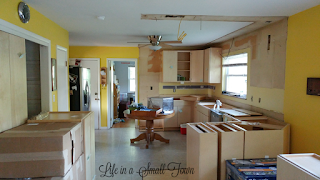 When is this ever going to done??? I'm so ready to have my things in my new cabinet and to be able to cook & bake in my new range. Not to mention to have water in the kitchen.
Last Thurs., the contractor texted to let me know CG will be here Tuesday to restart. He said CG had something to attend Wed. morning, but would come back in the afternoon.  I originally planned to spend a couple of days in Baton Rouge with MS, or drive up to North Alabama & spend the night with my Cooper SIL, but since the restart was happening on Tues., I ended up leaving early Mon. morning and driving the whole way.
I guess I should've said the restart was supposed to happen on Tues. I woke up early, walked, took a shower, and waited. I finally received a call from the contractor at 9:45 to tell me that he didn't have CG that day. He said he didn't know what happened. (I've heard that before.) I reminded him that I go back to work on the 25th and if the kitchen isn't done, they'll have to do it in the evenings.
I went to my piano lesson, then marched right down to Home Depot to talk to the manager. I told him about last Wed. when the contractor said that CG would be there next day, our original finish date was the 5th because I was going out of town on the 6th, and that work was supposed to start on Tues. but didn't because he didn't have CG that day. The manager said that he is going through some renovations on his house, so he completely understands what we're going through (although somehow I doubt that). He said that calling over an hour after I was expecting someone to be there was not acceptable. I told him I was beyond mad, and I'm tired of getting jerked around. I also slipped in that our son works for a law firm who represents contractors, and he said I should fire them and get someone else. The manager said he didn't know what was going on, this company is usually really good; they always do turn-key...at which point I said, "except for us" and told the manager that the contractor said he didn't know he was supposed to fix the strips in the floor and ceiling. The manager called the contractor and told him that Home Depot is at his mercy, but he is representing HD. He told the contractor that he is to call me to tell me what time to expect someone to be here. Next thing I know, I'm getting a text from the contractor telling me that a different CG will be at the house at 8:30, but the original CG will "probably" be there in the afternoon.
While I was at HD, I talked to the lady that the designer told me to talk to about viewing the slab for my countertop. She called the countertop people and relayed to me that I wouldn't view it until after the measurement had taken place. It's possible that the designer meant to tell me to see about the viewing if the cabinets had been measured, not hadn't.  No big deal; hopefully I can call and set up the measurement for next week. I also asked this lady about the new utility cabinet, which came to the store on Monday. I didn't get an answer from the assistant manager about how it was going to get from the store to the house; she only said that she had notified the installer. The lady called the contractor to see if the new CG was going to pick it up. I was told that the contractor said that someone would transport it from the store to the house. (Although when I talked to the contractor Wed. morning, he said "they are going to deliver it today"....I'm not sure who "they" are, but he sure made it sound like he wasn't going to be the one doing it.)
Wed. at 8:45, the contractor gets to the house; the new CG around 9:15. The contractor confirmed that the pantry cabinets have to be taken out, the floor has to be taken out, and the boards in the back have to be taken out. Then they all have to be put back in. He also said they need to determine the floor that needs to be taken out for the new peninsula, and the intercom has to come out because part of a cabinet will be there. I told the new CG that CH is quite a perfectionist, so if the cabinets are in perfectly he'll want them redone.
So, the new CG is working and everything is moving along.  And then the larger utility cabinet was delivered. I looked outside and saw that it was out of the box, so I went out and asked if they wanted me to look at it before they brought it in. They showed me a blemish on the outside of it:
The guy delivering it asked if I'm going to accept it, and I told him no. I'm paying too much for it not to be perfect. Even the manager at Home Depot said that we're paying for premier cabinets and they should be perfect.  I emailed the above pictures to the manager & assistant manager of Home Depot, the supervisor of consumer affairs for Thomasville, the Thomasville Rep, and the designer (who is out of town this week). The store manager replied back and asked for my phone number, then he called me pretty quickly. The Rep also called and said he emailed my pictures to the plant manager. He agreed that it is not acceptable.

Yesterday, CG2 came and redid the pantry cabinets, except for the one that is being replaced. He came, started work about 45 minutes later, took a break an hour later, then lunch an hour after that. He took out the plumbing and made holes in the sink cabinet for the pipes. He moved the cabinets where they will go when they are actually installed. Before he left, he said that CG will be here on Monday. I asked if he knew if anyone else is coming Thursday or Friday, but he said he didn't know. I texted the contractor last night and asked, but haven't heard back from him. Guess another call to the store manager will be made today. I'm pretty tired of getting jerked around.
Update: Received text message from contractor as to if someone is coming today. His response: "Maybe tomorrow for Monday for sure." I certainly hope they can do everything in a week, because the deadline is July 24th since I go back to work on the 25th. I am now in the "I'm so mad I'm going to cry" phase.


Another update: The Rep called me and said that the plant manager said the blemish looks like it happened during shipping. He has ordered another one for me.
I received a text from the contractor saying that the new CG will be here tomorrow.