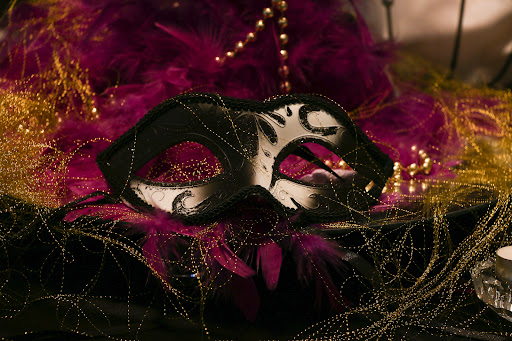 Photo by Hush Naidoo Jade Photography on Unsplash
I had my first King Cake when we lived in South Carolina. A couple that was in our Supper Club was from Louisiana and their contribution to dinner was a King Cake. Oh my, was it ever good! I kind of forgot it after that until MS lived in LA. I think one year I ordered so many the delivery man questioned me about it!

Last year I wrote about my disappointment with a local bakery's King Cake. I still can't get over it, even a year later. I'm not sure if the bakery is still open; they do have amazing cookies. But, I wasn't going to be taken again this year. I went online for our favorite place to buy King Cake, and...SOLD OUT! Whaaaat? It's only January!! They shouldn't be sold out already! But sold out they were. I did some Google Searches and found a bakery in Picayune, Mississippi that claims to be the "Home of the Original Cream Cheese King Cake". So I took a chance.

The difference in this King Cake was that it was shipped without the icing and decorations already on it. It was included in the box with simple directions. 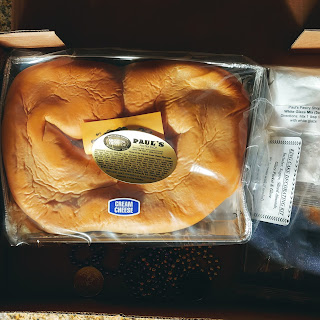 Decorating it was easy. This is just my opinion, but they should double the icing and half the decorations. Not that we need all that sugar anyway, but I'm just saying! Here's how much of the sugar and almonds I had left: 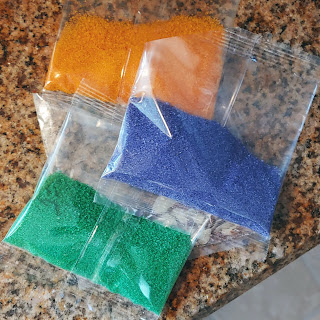 I didn't use very much sugar because the icing didn't cover the whole cake. The finished product: 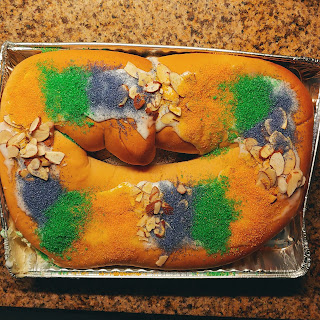 See? Not enough icing and I spread it as thin as I could. I don't know if the colors are supposed to be in a certain order; if so, I definitely messed that up.
The taste was really good. CH said this one tasted more like a bagel whereas the ones we've had from the other place were more like a pastry. I'm a cream cheese lover, but I think there's too much. But it IS really good! I guess once you've had one from the Original, everything else is chopped liver.
I'm going to put a reminder in my calendar for next December to check the website every day so we can get the best. I'm still shaking my head that they're sold out already.