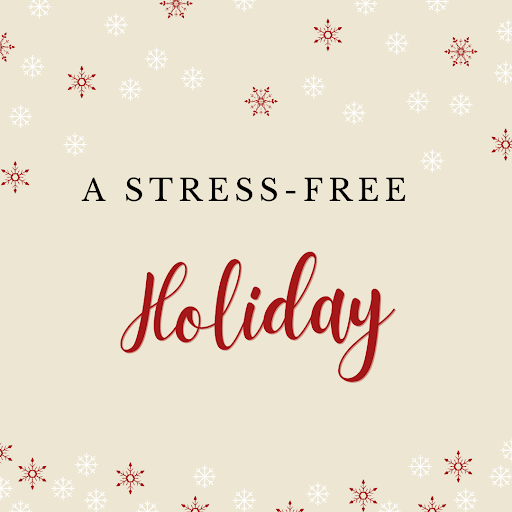 As I read back over last year's first post, I had to laugh. I wrote about last Christmas being stress-free, but this year definitely wins...hands down! Last Christmas came as close to being perfect as it could ever be, so I decided not to compete with it. OS is living across the country (again), YS moved out, and MS is now living with us. Still no grandkids (I've now lost hope on that ever happening) and the boys have each said they don't like Christmas. On the upside...no gifts to worry about! 😀 Seriously. I didn't step foot in a store except for a grocery store the whole break. What could be less stressful than that?

Truth be told, I still can't "get into" Christmas like I used to. It's been 7 Christmases since my mom passed, and I'm still grieving during that holiday. And on top of all that, can I just say that 2021 just sucked for my family? As in, the worst year ever.

I did very little baking (mostly only as gifts for my neighbor and church personnel) and even less decorating. I couldn't face putting up my big tree; besides that, some of the lights are broken, others aren't working, and it just looks sad. I ended up buying a prelit $20 3 feet tree and a smaller prelit tabletop tree, putting up my childhood creche, and calling it quits. 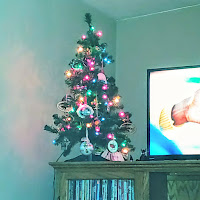 This tree holds ornaments that I picked up while on vacations over the past 10 years. It started when we used to go to The Keys between Christmas & New Year's. 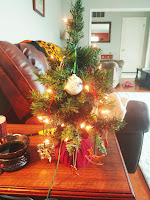 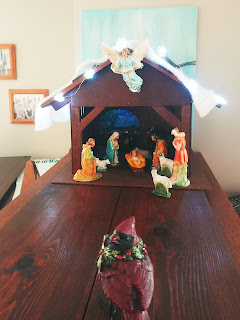 I bought a few things for CH, he bought a couple of things for me, and we were done. We had a very scaled-down Christmas Eve Dinner with MS and YS' GF (YS had to work); we didn't even eat in the dining room. 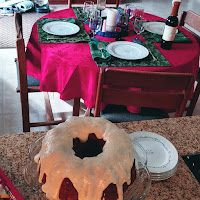 We usually have a big Christmas Day Brunch, but since YS had to work that evening, we decided to put it off until the 26th. I made cinnamon rolls and we just kind of grazed after Mass. After Sunday Mass, I got everything ready for brunch. YS & his GF were 30 minutes late, but was I stressed? Heck, no! 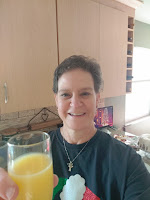 (The mimosas may have helped some!) 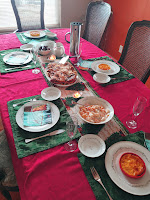 I didn't even put up my Christmas carousel this year. I pulled it up from the basement but then decided to heck with it. No stress.
We usually go camping between Christmas and New Year's but CH had a chemo treatment on Tuesday so we weren't able to go anywhere. But you know what? It was nice being at home for NYE. I cleaned out a lot of the house and got rid of a bunch of stuff. I watched movies, cleaned the house, read, and took Gurl Dogg on daily walks. It made me wish I was already retired!
But I'm not. My school district had an administration day scheduled for Monday with the kids returning on Tuesday. After 2 weeks of unseasonable warm temperatures, we had snow Monday morning! It wasn't much and it started melting before 10:00 a.m. but it was nice to not have to get out of the house. Having a bonus day for blogging was nice, too!
Email ThisBlogThis!Share to TwitterShare to FacebookShare to Pinterest
Labels: Christmas, holidays, New Year