An Ireland Adventure: On the Way to Killarney

We had a bit of a rough start to begin our drive to Killarney. We had to get fuel, only CH couldn't get the fuel tank open. The key wouldn't turn as much as it should have. He asked a guy who pulled in beside us if there was a trick to it, and that wonderful man tried for about 30 minutes to get it open but couldn't. He suggested a mechanic but then mentioned that since it was a holiday he may have trouble finding one. CH went inside to see if he could get some help. This was after calling the guy at the camper place and leaving a message. While we waited for a callback, CH told me that I might as well walk around town. Well, there was a Catholic Church right next to the gas station and Mass was just starting. So I went in for Mass. The Church was really pretty. 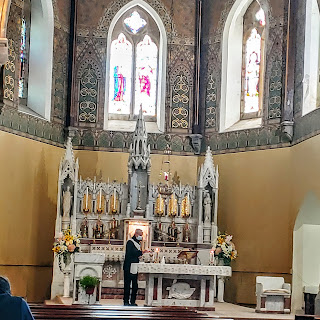 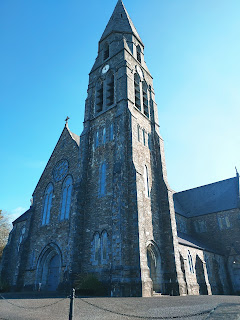 By the time Mass was over, there was a mechanic's truck pulling away. A lady in the station called someone she knew who came and lubricated the key so CH could get it open. That put us behind schedule a bit but we weren't stressing over it.
On the way to our sightseeing destination, we saw a castle so we decided to stop. It was closed so we didn't get to go into it, but we were able to walk around it. 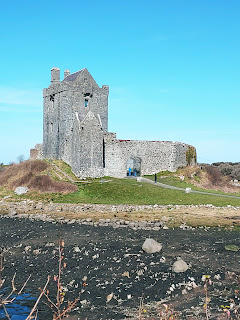 Dunguaire Castle is a tower house that was built in 1520. WB Yeats and Bernard Shaw were among the great writers who met here in the 1920s. There are tours available beginning in April as well as period-style banquets. 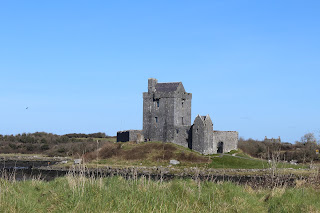 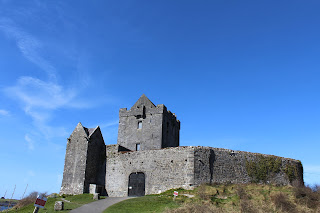 That was a pleasant surprise! Instead of turning around and going back to the place we should have gone, we trusted Google maps and ended up going the other way. That took us through some beautiful Irish countryside, although the roads were pretty narrow.
I remembered seeing a sign for Irish Natural Stone and found a contact email online. I emailed the company I received a reply: We were in The Burren. As the lady described it: The Burren in County Clare is one of Ireland's most amazing landscapes. Here, cool grey rock etched with crevices and cracks tumbles down to the wild blue Atlantic Ocean. The result is one of nature's most extraordinary phenomena: a huge rocky pavement dotted with rock formations, caves and fossils, as well as an incredible array of flowers, from native species to Arctic, Alpine and Mediterranean plants. The limestone landscape of the Burren Formed millions of years ago beneath long-forgotten tropical seas.
When CH & I talked about taking this trip, I knew I wanted to stay away from most of the touristy places. I wanted to avoid running into tour buses and Americans who shouldn't be let out of the country because they don't know how to act. (Sorry, but it's true! I think Americans should have to take a class on how they're supposed to act when visiting another country. **off my soapbox**) I wanted to get out and meet the Irish and see the countryside. That's exactly what we did. One of MS' friends married an Irishman and lives outside of Dublin. I contacted her for suggestions and she gave me some good ones. One of the best suggestions she gave was Kilkee Cliffs. I saw Cliffs of Moher last time, and while they're pretty, I didn't need to see them again. She assured me that these cliffs are every bit as pretty/spectacular, even though they aren't as high. They reminded me of Cliffs of Moher, just without the crowds and the rails. Keep in mind that these pictures don't do the views justice. 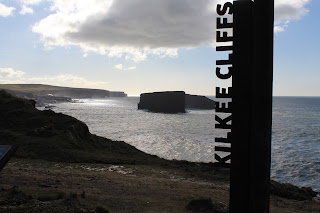 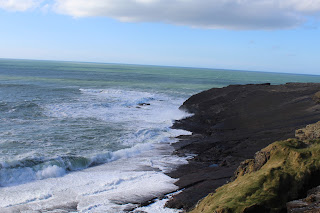 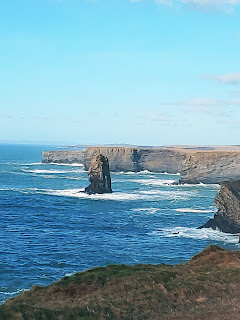 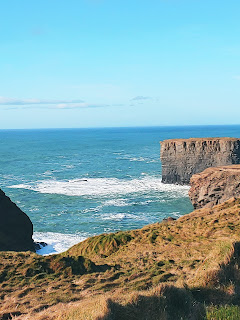 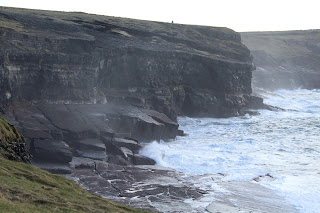 There were a few memorials there for people who lost their lives. It was really windy so I can see how they could be blown over the cliff if they got too close. At one point, we were the only ones out there. My advice would be to skip Cliffs of Moher and head to Kilkee Cliffs. It's just an hour south of Cliffs of Moher and not touristy. Unless touristy is your thing, of course! We didn't stop in the town but it looked very cute and very busy. I'm sure in the summer it is one hoppin' sea town!
Kilkee Cliffs was crossed off the list! To get to Killarney we had a choice: go around the River Shannon or take the ferry and go across. During the last trip, our driver took the ferry. I asked "Galway Girl" (the young lady from the plane) which way would be faster and she said to definitely take the ferry. We sent my SIL M a picture from the ferry: 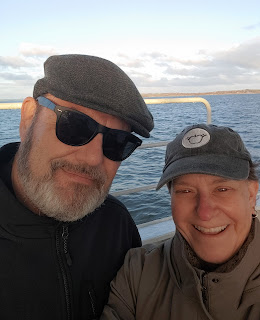 From what we've heard, Limerick can be a rough part of Ireland, so it's better to avoid it if possible. I'm glad I remembered the ferry. It gave CH a bit of a break from driving. After the ferry we took a National road all the way to our next campsite in Killarney.
If you want to know about that campground, visit Camping in Killarney on the camping blog.
Email ThisBlogThis!Share to TwitterShare to FacebookShare to Pinterest
Labels: Ireland; Ireland Adventures; travel