An Ireland Adventure Begins: The Prelude 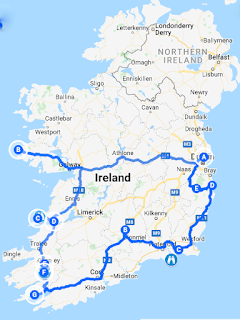 If you read my posts about my previous trip to Ireland with my SIL, you know how I left a piece of my heart there. For my 60th birthday, CH asked me what I wanted to do. I told him a trip might be nice so when he then asked where I wanted to go, I told him without hesitation that I wouldn't mind going back to Ireland. He came up with the idea of renting a campervan and camping around the country. We bounced the idea of making the trip back and forth. At one time, I suggested that we not travel internationally and take a trip in the U.S. One of the factors in deciding to go is CH's chemo treatments. We needed to time it right and make sure he was going to feel up to going. I had Spring Break coming up and received permission to take the next week off. That was something I've never done but I know people who routinely will take a week off for vacations so I didn't feel too badly asking for the time off. We didn't definitively decide to go until about 3 weeks before break. I think CH did some research on the place where we rented the camper after speaking with our friends who live in England. John recommended the company to us.

I am usually a HUGE planner. I like to research where I'm going and find out the history behind it. I like to have an itinerary planned out so I don't miss anything. This time, I had most of our nights reserved at campgrounds except for the last 2 nights. In Ireland, if you find a pull-off on the road and you feel safe, you can stay the night as long as signs aren't posted. I figured at the end of our trip we would feel comfortable enough with the van to do just that. Right before we left I took a look at when we could pick up the van...not until 3:00 pm on March 16. We were told to expect at least an hour so they could run us through everything on the van. As I looked at the map and where we were going for our first campground, I knew there was no way we CH would be comfortable driving on the right side of the van, on the left side of the road in the dark with a manual van that had the gears on the left side. I was able to cancel the first night of the 2 nights we reserved and Mark at Bunk Campers was most kind with finding us a place to park the first night. (More on that in a later post.)

I'm jumping ahead of myself. I have to talk about actually getting into Ireland first! I checked the USA Embassy website to find out what we needed to get into the country. COVID has changed everything and the regulations are changing weekly, if not daily. When I first checked, the Irish Government said as long as you have your vaccinations within 270 calendar days, you're good. Except mine had been almost a year. I hadn't planned on getting a booster and really didn't want to, but I did it for the good of Ireland. I had no problems with my vaccination, but the booster gave me a fever and chills. I'm not sure if it had anything to do with the fact that I had COVID (or, "the virus" as my school kids say) 3 weeks before. But, it was done and I could get into Ireland. CH's vaccine was within the 270 days so he was all good. Another option was to have a letter from the doctor stating that you had COVID, were recovered and were cleared to travel. With CH's condition, he had documentation that he had it. I, on the other hand, did a self-test and didn't take a picture of it. I also didn't go to the doctor because I didn't need to. So, I have no medical documentation that I actually had it. I spoke with my dr.'s office because I had a visit with her and she said that I had it; I just didn't know if she wrote it in my chart. The nurse told me that my dr. isn't giving anyone a letter because the CDC requires the doctors to state that their patient will not contract COVID within 3 months. What doctor can say that???

I was ready to get into the country. The week before we left, the Irish Government changed the regulations: No proof of vaccination was necessary. I went through the fever and chills for nothing. Now my anxiety was getting out of Ireland. The U.S.A. required a negative COVID test the day before departure. On the CDC website, I discovered that you can test positive for COVID up to 3 months after you've had it. I figured it would be just my luck to be in that small percentage of people who would be positive. CH told me to stop worrying and if nothing else, I'd have to stay in Ireland for a few more days. I figured that if he wasn't worried about the money, I wouldn't either. Of course, it took me a while to get to that point. I did a couple of self-tests before we left and they were both negative. I didn't think about it again until the day before we had to test.

We left Knoxville Sunday afternoon, flew to Philly, and then to Dublin. We were in Ireland around 8:30 a.m. Monday morning. We had a little bit of confusion finding the shuttle to the hotel, but once we found it we were at the hotel within a couple of minutes. We opted to stay close to the airport since the place where we picked up the van was just a couple of miles from there. We ended up taking taxis into city centre later that day and the next day. We were allowed to check into our room early for €20. When you're tired and just want a shower and a nap, you'll pay! Neither one of us slept on the plane. For me, the seat wasn't comfortable and I was way too excited to sleep.

We got to Dublin without incident. Come back and see how this trip was compared to my last time!