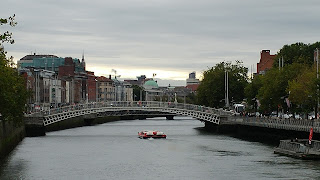 We arrived in Dublin around 8:30 a.m. Once we found the shuttle area we were at the hotel within a couple of minutes. A word about our hotel: This is what I would consider a typical European hotel room: not many frills, just the basics, and with that, just enough room in it to put your suitcases and get a good night's sleep. The way I look at it: I'm not in Europe to stay in my room, I only want a space where I can sleep and take a shower. So, the Europeans are quite smart that way!

Check-in was at 2:00 but there was a room available and we were able to get in it early for €20. As I said in the previous post, it was worth the extra money to go ahead and get settled. Our room was on the 1st floor; the lobby was on the 2nd floor which meant we were kind of in a basement. The room was sufficient and the bed was very comfortable. The hotel prides itself on being the closest to the airport. We heard some airplane noises but not enough to keep us awake; the noise wasn't very loud at all.

But who wants to hear about Dublin instead of the airport? After our naps and showers, the front desk called a cab for us so we could head into City Centre. We have British friends who flew over for a few days while we were there. The last time we saw them was in 2016 during our trip to SD and CO. Her sister lives in CO and they were at the beginning of their Mexico/South America trip. 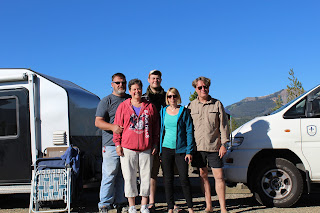 They suggested that we meet at The Long Hall. This is one of the oldest pubs in Dublin and is in the Temple Bar region. It was a very traditional Irish pub, but unfortunately (or fortunately) I was caught up in being in Ireland with our friends that I completely forgot to take pictures of the inside. On the last trip to Ireland, I made the mistake of not drinking a Guinness until the end of the trip. I didn't make that mistake again. I started the visit with a pint right off the bat:The best part about The Long Hall: very few tourists. I don't know how our friends managed to find places in the Temple Bar area and avoid most of the tourists, but they did it! That was just the way I wanted to visit Ireland.
Jane asked for a recommendation for dinner so we left there and headed toward the restaurant. Except we didn't find it. We did, however, find this little place instead:
This stumble was quite a find! In fact, we liked it so much that we stopped in the next night for a nightcap! Once again, very few tourists. We ate dinner there the first night then said our "good nights" and went back to the hotel to crash. We decided to split up the next day (because there were museums they wanted to see that we really weren't interested in and vice versa) and then meet for dinner that night.
Actually, we had no plans of what to see. I didn't make plans and didn't make a list of what I wanted to see. A lot of it depended on how CH was feeling and what he wanted to do since I had been there and had already done most of the "touristy" things. One thing I really wanted to see was Kilmainham Gaol but it was closed on Monday/Tuesday (when we were there) and then it was booked for our last day before we flew home. Next time.
We took the bus to City Centre. The bus was a lot less expensive than the taxi but it did take a little longer to get there. The bus stop was just at the back of the hotel, so it was super convenient. I forgot to mention: there was a Circle K gas station/convenience store also just at the back of our hotel so we were able to walk across the street for snacks and sodas. They had a decent food area as well, so we even ate breakfast there one morning.
CH asked if there was a church or something I wanted to see that I didn't see last time, and of course, I said that there was! St. Mary's Pro Cathedral is actually just around the corner from the hotel where M (my SIL) & I stayed; we just never ventured over there because it's not on the main drag. The original plan was to build the cathedral where the General Post Office (GPO...there's a lot of historical significance from the Easter Uprising at that spot) is (right on O'Connell St.), but the location was changed due to worries about the delay of Catholic Emancipation. So it sits on what I would consider a side street with very little traffic. We had no trouble finding it; we walked in and it just so happened that it was near the beginning of mass! 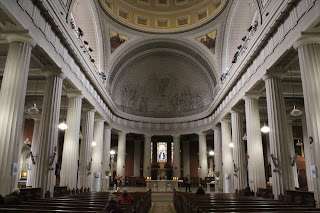 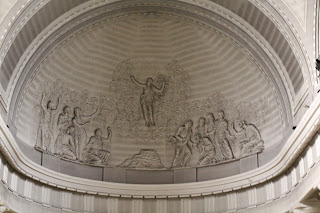 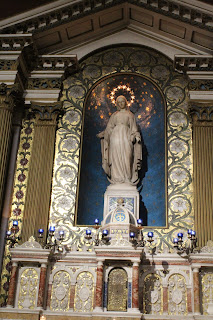 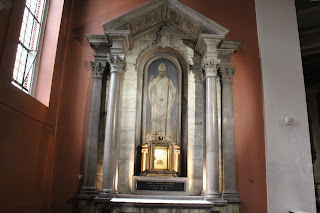 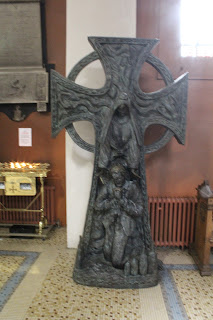 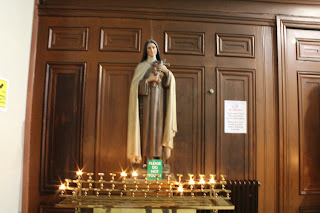 Just before reaching the Cathedral, we saw this pub and had to laugh. It is just down from the Cathedral. How perfect is the name for a pub that close to a Catholic Church?
Unfortunately, it was closed at 11:00 a.m. on a Tues. A little research revealed how it got its name. Excommunicated Catholics (including Michael Collins) involved in the rebellion from the Irish War of Independence (1919-1921) would stop in to have their confession heard and to receive communion from sympathetic priests from the Cathedral. It was called the "Maid of Erin" at that time. This is one place I'm putting on my list for my next trip.
After Mass we wandered around a bit, just going where the wind took us. We went into a Visitor Information Center and looked at the brochures. The EPIC Museum was suggested to us by one of MS' friends who lives outside of Dublin so we decided to try that out. It wasn't too long of a walk and it was a pretty nice day so we enjoyed it. It is located in the Docklands area of Dublin. The building itself is quite impressive: there is no lumber or combustible material in the actual building. The basement, which is where EPIC is located, once housed wine. I didn't take any pictures inside the building but take a look at the pictures on the website. When we went into the building, we were greeted by a long hall of shops and places to eat. We looked for something that was somewhat healthy and found Freshii. We should have ordered 1 burrito and split it; it was way too much food but at a very good price. The museum itself was incredible. We were told to expect about 1.5 hours to get through it but we were there for around 2.5. It was that good. And, once again, very few tourists. There weren't more than 6 other people in there with us at one time. If you aren't from the US, I'm not sure if you'd get as much out of it. It briefly touches on other places the Irish emigrated to (Australia and the Caribbean) but the focus is on the US. Maybe because of the history of why the Irish went to the other places since it was against their will? So I wonder if it could truly be said that they "emigrated". Hmmmm...
After that, it was time to make our way to meet our friends for drinks and dinner (followed by a nightcap). We took our time and walked along the river for a while until we had to turn. This seemed like a sketchier part of town so we walked a little faster once we moved away from the river.
Guess who we passed on the way? Yep, Molly Malone! We had to stop and take a quick picture. 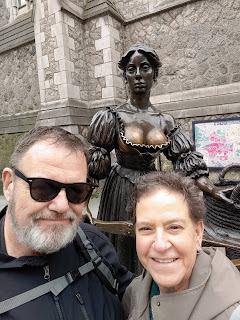 We passed this street that I thought looked interesting: 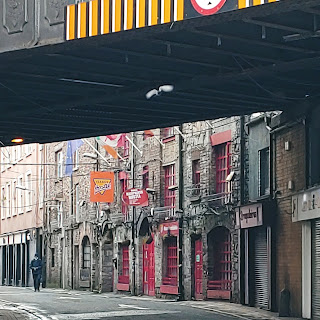 We found "The Hairy Lemon" without too much trouble. 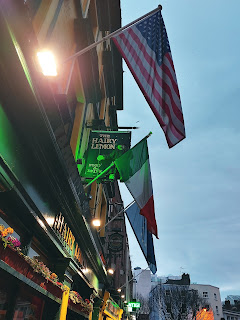 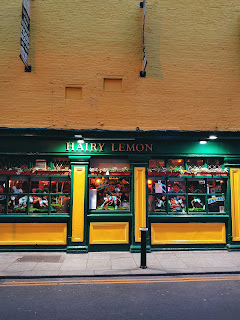 I had my first Irish Coffee for this trip here. Let me say, this is NOT the place to get one. The whipped cream on top was waaaay too stiff and sweet which makes me think it was out of a can. This pub was a little more crowded than the other 2 places we went to. It could have been because it was the day before St. Patrick's Day or because it's just more touristy It's touted as Dublin's trendiest pub. It's hard to say.

Jane reserved a table at Gallagher's Boxty House. (I didn't take a picture there!) We saw another Boxty Restaurant somewhere else so it must be a chain. The food was absolutely excellent. We each ordered something different and not one of us was disappointed. Our server was very attentive even though the restaurant was pretty packed. So, what is a boxty? It's a traditional Irish pancake. I don't think any of us had one though! We did, however, have the Bread Pudding. John encouraged it because his mom used to make it. His recommendation was perfect.
After dinner we headed back to the Bankers Bar for a nightcap. We strolled back to the River Liffey so we could actually cross the Ha'Penny Bridge since I didn't actually go over it last time, I just saw it. It is the first pedestrian bridge over the River (it opened in 1816) and was the only one until 1999. It's estimated that 30,000 people walk over this bridge daily.

Sadly, we had to say goodbye to our friends. Hopefully, it won't be another 6 years before we see them again. Just a little backstory: CH met them while riding the Continental Divide on his motorcycle. If I'm not mistaken, they were beginning to ride around the world on a motorcycle...2 up. Then, when we were in London in 2011, we took a train down to Surrey to spend the day with them. The SD/CO trip was the last time we saw them. It's always great fun to see them and to catch up. 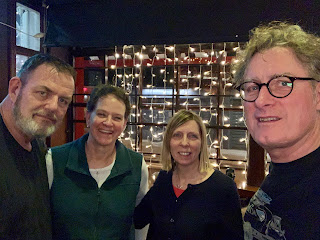 They were brave enough to stay in Dublin the next day for the St. Patrick's Day Parade and flew back to England that evening. I had enough of Dublin. Once you do the touristy things (which M & I did last time), Dublin is just a big metropolitan city like any other. I was ready to get out of town and get to the true adventure!
Email ThisBlogThis!Share to TwitterShare to FacebookShare to Pinterest
Labels: Ireland; Ireland Adventures; travel; Dublin