We took a bit of a side trip on our way to the Hook Peninsula. No, it wasn't the Blarney Stone because...eeeew. I've heard some nasty stories about what local teenagers do to that stone at night! No, we went past that tourist place to another. The Rock of Cashel was something I knew CH would enjoy seeing, so we took a detour to drive north of Cork to visit. During the drive, CH pointed out this cross on a hill: 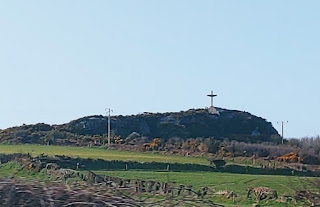 This is called "Devil's Bit". According to legend, the devil took a bite out of this hill then spat it out. The land is where the Rock of Cashel stands.
As we entered the parking lot, we noticed that the bar allowing entrance was taken down and there was a man who appeared to be fixing it. Hooray for not having to pay to park! We parked and took in the sight of the castle on top of a hill: Before we climbed the hill we wandered around Cashel just a bit to find someplace to eat lunch. On the way, we went through an alley with a wall that probably could tell quite the story if it could talk. 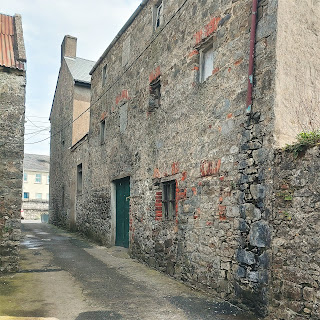 I'm not sure what captured my interest about that wall, but I just thought it was fascinating. There is no telling how old the building is.
The Rock of Cashel (or St. Patrick's Rock) is quite impressive as it's on top of a hill, towering over the town of Cashel:
As we trekked up the hill we noticed the ruins of what may have been a wall protecting the castle. 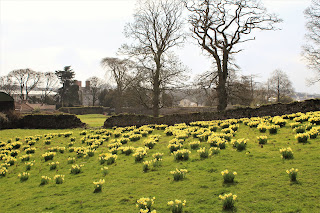 The climb was steep enough to warrant a resting bench for those who need it. 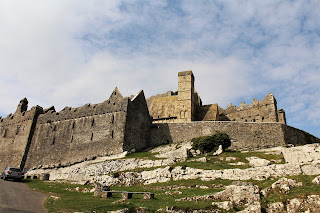 After much digging, I found out that this is called Scully's cross. It was built in 1867 and in 1976 it was struck by lightning.
The view of the castle near the top of the hill was just as impressive. When we arrived at the top and went to the entry to pay, we were told that there was maintenance happening so we didn't have to pay. The bad part of that is that there were no tours and we weren't able to go inside the Hall of Vicars where the original St. Patrick's Cross is housed. In the cemetery, there is a replica but I must have missed it. Another downside of getting in free! 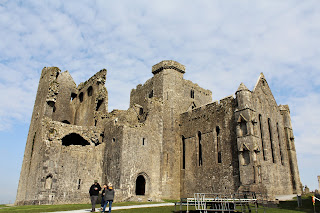 The left side of this building is a "tower house". Part of the stone was shipped to Watertown, WI, and was used in the cornerstone at St. Bernard's. the right side of the building is the cathedral. The round tower is the oldest part of the castle still standing. It was built in the 12th century. 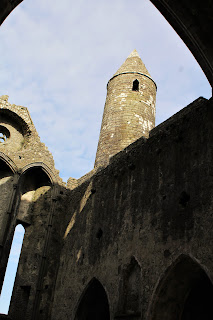 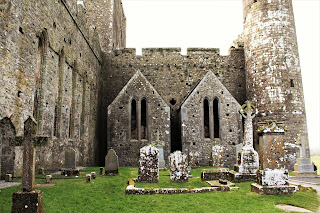 Apparently, we missed part of the cathedral. There are more frescos than what we saw. I came to this one and didn't go any further because it looked dark and I thought that was the end of the building. 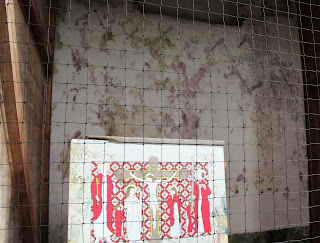 The frescoes are weathered by time and weather; the ceiling was taken off of the building in 1749.
I'd love to know the story of that cross. There was nothing else around it. The employees of the site were not to be found wandering around so I couldn't ask anyone.
The view of the countryside from the graveyard was just amazing. This is the near-perfect picture of Ireland with a Celtic Cross and white dots of sheep in the field: 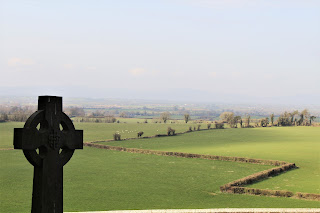 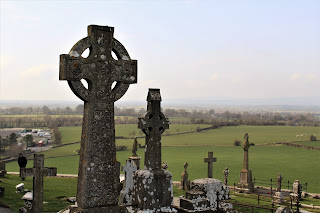 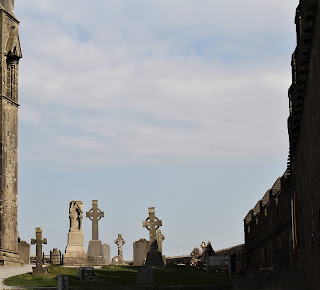 From the Rock of Cashel you can see the ruins of another abbey: Hore Abbey. A young man I spoke with in a gift shop told me that many of the kids have their first kiss there.
I wish we had asked if it was possible to go down and have a look around. (On the list for next time!)
Before we left Ireland we had the news on the tv and we discovered why we didn't have to pay to get into the Rock of Cashel: Prince Charles & Camilla were there a couple of days after we visited. I'd like to go back and pay closer attention to the details of the buildings. I'd also like to find St. Patrick's well, which is where St. Patrick is said to have baptized King Aengus in 432 AD. The Hall of the Vicars Choral was closed because of the royal visit, so I'd definitely like to stroll through the museum and see the real St. Patrick's Cross.
After our detour, we headed to our next destination. The next campground is on a working dairy farm on Bannow Bay. It was a gorgeous site and not too far from a village where we were able to drive in, grab a bite to eat as well as some groceries. 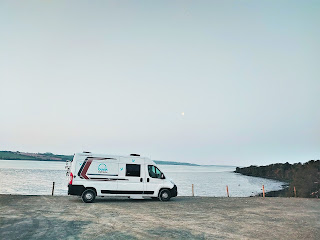 Check out the next post for more amazing places to visit in Ireland!
Email ThisBlogThis!Share to TwitterShare to FacebookShare to Pinterest
Labels: Ireland; Ireland Adventures; travel