I absolutely loved where we stayed on the Beara Peninsula! It kind of had the feel of campgrounds we've stayed at in the mountains at home, with the big hill being the background. 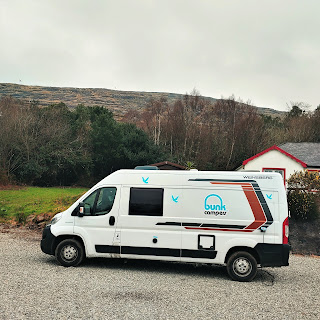 And at the top of the hill were sheep the first night we were there. Yes, my fascination with sheep didn't wane as the trip continued!
We rested when we got there and did laundry. We also walked down the road to a little grocer to pick up some things. Usually when we camp we make out a menu and shopping list. Then we'll go to the store and get what we need. We didn't do that this trip since we knew we'd be eating out a lot.
But enough about that! Just as we've done the whole trip, we didn't travel to the Beara Peninsula with any plans except that we knew we'd have to drive to Castletownbere. There are a couple of ferries that will take you over to Bere Island and we talked about taking one over, but to drive the van over was €50. With the other ferry we would have parked the van before boarding and walked anywhere we wanted to go. There was one thing that CH was interested in but it was closed. So, we decided not to travel to the island and to just stay in town.
Castletownbere is a thriving fishing town, with colorful buildings and narrow streets. It is also home to the Irish Fisheries Training School. The US Navy had a Naval Air Station here during WWI. 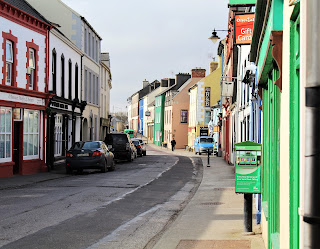 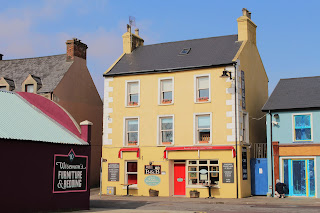 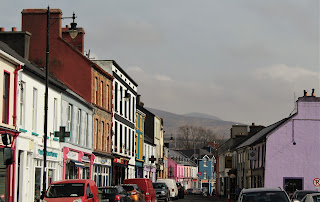 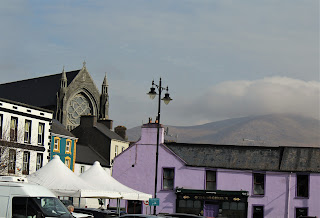 The first stop was a church sitting on a hill. Built in 1912, I would consider it a "newer" church, especially by European standards. It was pretty impressive with steps going up to it and a bell on the side of it.
Mass wasn't being celebrated but the doors were open. We were able to take a few minutes to enjoy the beauty.
We strolled into MacCarthy's Bar for lunch. There were a couple of other people in the bar: a man from Chicago whose wife was from Castletownbere, and a young woman from Wales. She was traveling around Ireland by herself. She was just lovely to talk with!
I didn't realize until I was home and checking out the website how famous this pub is! Established in 1860, MacCarthey's was the recipient of one of the first licenses to sell alcohol in Ireland. Adrienne is the 4th generation owner; her father was a doctor in WWII and was a prisoner of war in Nagasaki, Japan. The commandant of the war camp respected him so much that he gave him a ceremonial sword. The sword is in the bar but we didn't see it. The pub is also in the 2013 documentary "The Irish Pub". I watched it after M & I returned home after our trip. It's well worth watching. We were so close to a few of them; I hate that we missed it!
Adrienne gave us a couple of excellent recommendations: Kilcatherine Church and Dunboy Castle. She said the views from Kilcatherine were incredible, and she was right.
We drove to Dunboy Castle first, only we didn't realize we were there. After doing some research, this is definitely it. From what I gather, people call Puxley House "Dunboy Castle".
The manor was burnt in 1920 by the IRA in retaliation for the British Crown destroying houses that harbored IRA men and weapons. Over the last 20 years, some restoration has been done with the intent of turning it into a hotel, but it was just sold either right before or when we were there with plans to turn into a hotel. There was a fence all around it so we couldn't get very close. This mansion was in a picture in a restaurant where we ate dinner. When I asked what building it was, I was told "Dunboy Castle", but that's not right. I thought maybe the names were interchangeable but from what I found out, they aren't. Dunboy Castle is, however, also called O'Sullivan Beara Castle.

It was a nice little find. The parking lot is small and isn't paved. We ran into a couple of people on the trail to the ruins but other than that, we were out there alone. After that, we were on our way to Kilcatherine. At one point I asked CH to stop so I could jump out and get some pictures. These are views I don't ever want to forget: 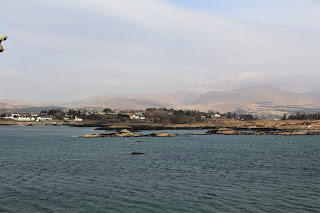 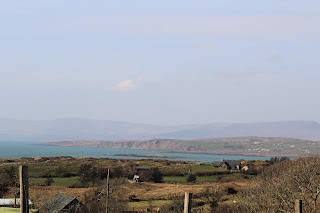 Between Dunboy Castle and Castletownbere, we saw a British couple who were also staying at the campground. They rented a camper as well but from a different place. We saw them walking along the road and as we passed by & waved, I wondered what they were doing because I didn't see anything of interest. I found out when we got back to the campground that they had swapped mirrors with a car. They stopped, the car didn't. The lady said that when they stopped to pick up what they could from their side mirror, she noticed a lot of glass but it wasn't from their mirror. The bottom of theirs had broken free and they were able to put it back on.
We misunderstood where Adrienne told us to go. She told us "Kilcatherine Point" so that's what we put in Google Maps. We passed the church and kept driving until we couldn't drive any further. 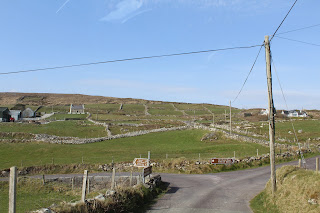 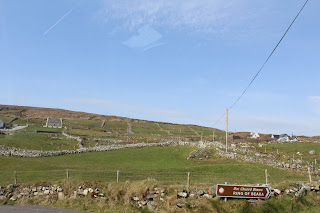 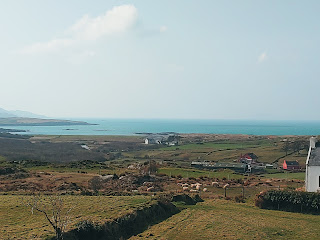 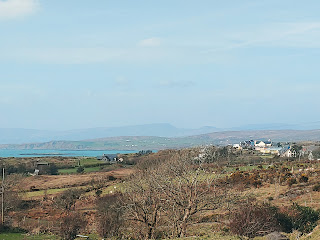 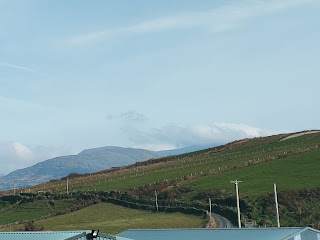 We turned around and headed back to the church; the views were stunning. I expected someone to come out and ask what we were doing that far out, but my guess is that they're used to that happening. 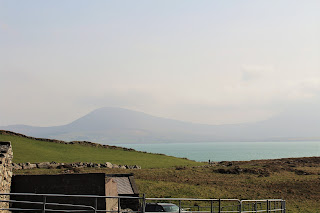 We were the only ones at the church so we were able to just revel in the amazing views and take our time marveling at this church ruin/cemetery that was built on the site of a 7th-century monastery. 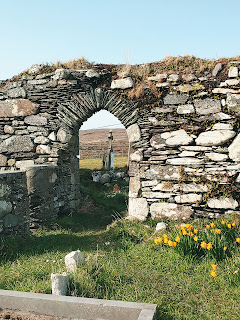 Just above the door to the left (as we're facing it) there is a stone. Some say it looks like a cat, others a human. I read somewhere that the length of the neck makes it unusual. If I had realized it was there, I would have taken a better picture. 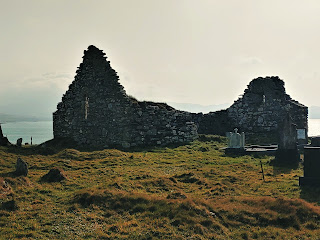 There is a stone cross in the cemetery that is said to be the oldest cross in Ireland. One of the downsides to not planning is that we didn't know to look for it. In hindsight, we should have googled Kilcatherine before we got there to get the scoop. I hoped that I inadvertently included it in a picture, and I think I may have found it:
I compared the headstones in my picture to one on another site and it looks like it could be, comparing its location in reference to the newer markers. 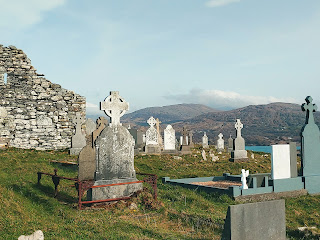 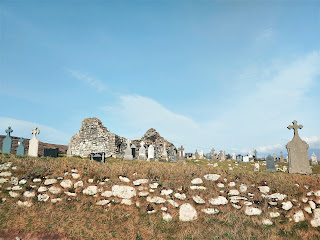 Adrienne (from MacCarthey's Bar) told us that during the excavation in 1990 tunnels were discovered. It is thought that the Vikings made them so that their wives and children could escape to the sea. The sign that is onsite said that it is believed that nuns occupied the church and the tunnels were built for them. 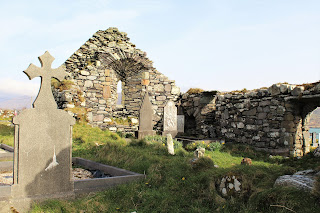 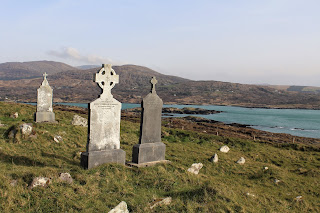 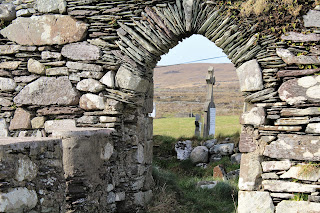 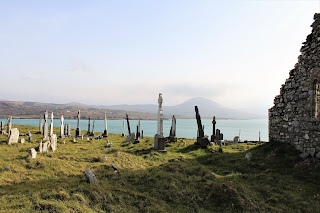 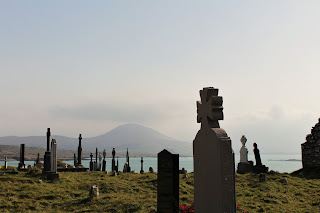 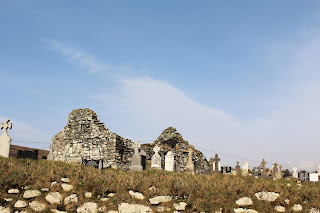 Another thing Adrienne told us was that man who spent his time between Kilcatherine and NYC passed away when he was in Ireland. He was buried so that his body faced NY, while all of the others are facing the other way. She challenged us to find him. When we were there we didn't find it but, as luck would have it, I captured it in a picture! That same picture also has (I believe) the oldest cross that I showed above. 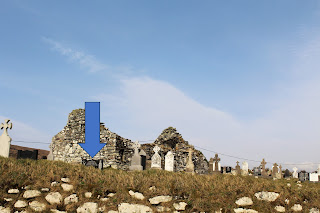 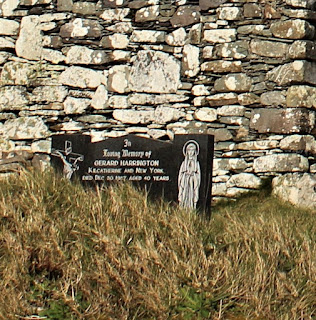 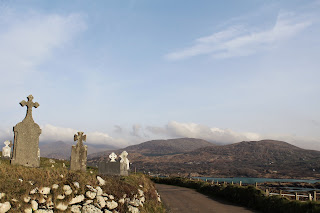 As we drove back to Castletownbere we drove through the little village of Eyres. It looked like a sweet little town worth exploring. (Next time!)
The only time we had trouble with our credit card was in a grocery store in Castletownbere. I went in to grab a few things (Bulmer's and brown bread among them!) and CH's card was declined. Mine was as well, so I had to get money out of the ATM. The sweet young lady said that the card machine had been down since around mid-afternoon and she assured me it wasn't our card.
Our day completed, we headed back to our campground for the night. The next day we were headed for our last planned campground (after a little detour).
To find out more about Hungry Hill Lodge and Campsite, visit our camping blog, Flyin' the Coop.
Email ThisBlogThis!Share to TwitterShare to FacebookShare to Pinterest
Labels: Ireland; Ireland Adventures; travel