~ Hope everyone had a good Thanksgiving.  It was just CH, the boys, and myself for dinner. My parents came up the street to eat with us.  This was the year for my side of the family to be with our in-laws, but since a family member just had some major surgery, we stayed home.  Here's a picture of my parents right after dinner: 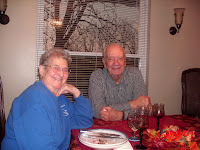 ~  Thanksgiving Dinner turned out great...except for the ham.  Guess I left it in the oven too long, but on the bright side:  the turkey was really good.  I found a recipe for cooking the turkey breast in the slow cooker, so I opted to cook it that way to free up my oven.  When I got a new oven a few years ago, we debated getting a double oven but decided to just get a single.  I don't really need a double oven...except during the holidays.  Somehow it all worked today and it was timed perfectly...except for the ham, but that was totally my fault.

~  My Christmas decorations are going up this weekend.  I don't think I've ever put them up quite so early.   Before we moved to Tn., we had real trees so I didn't want to decorate too early and have the tree die before Christmas.  Then,  once we moved, it was still football season until the first weekend of December.  This year, football is over and there's no reason not to go ahead and put it up.


~  I think it's very sad that last night was the last time Texas and Texas A&M will play football.  I thought for sure this rivalry would continue even though A&M will be in the SEC.  A&M has such great traditions surrounding this game.  Don't know what I'm going to do if A&M plays UT (THE UT, not Univ. of Tx.!)...I guess it won't matter to me who wins.


~  We have a chance of rain/snow mix Sunday night into Monday.  The high on Monday is only suppose to be 45.  And...the heat in my room isn't working.  Guess I'll be a nomad on Monday and work in a different room.  Should be great fun.  Last winter it was broken, and it took them until almost the Spring to get it fixed.  It got old real quick.


Linking up with Mrs. 4444!
Email ThisBlogThis!Share to TwitterShare to FacebookShare to Pinterest
Labels: friday fragments