Can you believe we've been doing the Hodgepodge for a year already?  And, Joyce doesn't appear to be running out of new questions for us!
1. What song reminds you of a specific time in your life and what is it about that song that makes you remember?
Just about any song from the late 60's, early 70's takes me back to the community swimming pool, which was the local hangout during the summer when I was growing up.  People would have blankets laid out in the grass, and their radios blaring.  Not a whole lot has changed at the pool since I was little, except for the remodeling of the concessions/changing rooms.   Good times! 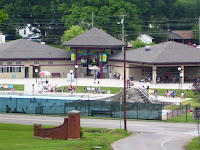 2. What's something you've given up on?
Purchasing a flute.  I honestly just don't have the time to get started on that.
3. What's something you'll never give up on?
My kids.  Even though there are times I just want to throw my hands up, I know that they're good boys with ambitions that may not be what we want them to do, but we raised them to be independent and go after what they want.
4. If you had to cook something from scratch in the next hour what would it be?
Crepes.  It's time to go to the grocery store, so I have NO meat in the house right now!
5. Have you started Christmas shopping? Decorating? Listening to Christmas music?
Absolutely not.  I have a strict policy not to decorate or listen to Christmas music until after Thanksgiving.   That's usually when I start my Christmas shopping, too.
6. What do you know about your parent's wedding?
I know that they had a full-blown mass wedding with a sit down lunch at the reception.  My mom's brother married them, and one of my dad's sisters was a bridesmaid.  One of mom's sisters was the matron of honor, and one of my cousins was the ringbearer.  When we had their 50th wedding anniversary, the only person from her side of the wedding party who wasn't here was her sister.  Without looking at pictures, I'm not sure who was on my dad's side of the wedding party.  I'm pretty sure one of his brothers was the best man, but I'm not sure who else was in the wedding.
7. I can't believe I ___________________.
Actually got to go to Wimbledon!  I never in a million years thought I would ever get to tour the centre.
8. Insert your own random thought here.
The nasty stomach bug has made its presence known in our house.  CH had it Sunday night, and I got it Monday night.  My stomach hasn't hurt like that in an awful long time.  Yesterday was the worst day this week this could've happened:  I had to call a parent at 6:45 a.m. to let him know that I wasn't going to be at work, so I would have to reschedule his 7:45 meeting.  He told me that he had to get off of work an hour early to come, so that made me feel awful, but there was NO way I could've even made it to the school.   I was suppose to work the basketball gate at one of my schools that evening, so the secretary said she'd find somebody to either work for me or switch with me.  On top of all of this, I have bus duty this week.  I found somebody to take my place (for a price, though!) so I'm out of school again since my stomach is still very queasy.
I'm not sure what the deal is this year:  I usually am able to avoid the stomach bugs going around, and only have 1 cold during the winter, but this year I already have had 2 colds and this stomach thing.  Guess I need to stock up on Airborn and make sure I take it.
Hope the bug has missed your house, 'cause this isn't fun at all.
Link up with Joyce and see how everybody else answered!
Email ThisBlogThis!Share to TwitterShare to FacebookShare to Pinterest