It's nice to finally have a chance to breathe.  Things get so crazy at the end of the school year; it seems like there's always some kind of drama that happens.  Everybody is under a lot of stress, and the smallest thing can blow up into something big.  I managed to stay out of the drama this year, thank goodness!  I guess I had too many other things going on to get sucked in!

Mother's Day was nice.  I told the boys that I just wanted them to fix dinner.  CH went to the store and bought everything, and  OS grilled steaks, cooked corn on the cob, and plated dinner.  MS set the table and got the food in its place.  YS was on clean-up duty.  I think that's the best Mother's Day I've ever had.

Tuesday was the last full day of school.  Tuesday night the Kindergarteners at one of my school had their graduation, so they practiced Tuesday morning...and afternoon.  The ceremony ends with the teachers coming out for recognition: 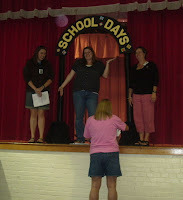 That morning, I went into one of the 2nd grade classrooms.  One of my students is all about Komodo Dragons.  When I walked in, she asked if I wanted to see some pictures she had drawn, and if I wanted to see the nice one or the mean one first.  After she showed me the pictures, she said, "Now I'm going to draw one pooping!"
My room at that school is off of the auditorium, so I got to see bits and pieces of the Kindergarten Graduation Program.  The kids perform a couple of songs, then get their "diploma" as their names are called.  After the program, the kids were walking off the stage when I heard one of the TA's say, "Why are your shoelaces tied together?"  Have you ever seen Kindergarten Cop?  The things that the kids say in that movie are spot on.

Tuesday night, CH, YS, and I went to see The Starlifters, who are part of the US Air Force Band of Mid-America.  If you ever get the chance to see this group, or any other groups associated with them, go.  They were just amazing!  Last year, the Hot Brass group came to town. They have this incredible tuba player that just blew us away.  The Starlifters are more of a rock band; they played everything from Boston, to Dave Matthews, to Gladys Knight.  The best part about the concert was that it was free, but I would've gladly paid to see them.  YS chose our seats:  on the 2nd row.  CH was convinced that the woman kept looking at him and smiling. 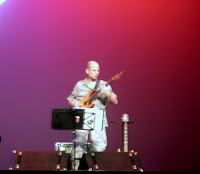 Laika (pronounced "like a") is settling in nicely.  Pepper & Ally are getting used to her, and Pepper has even started to play with her.  She had her first vet visit yesterday, and she greeted the vet with kisses.  Here's a short video of her first encounter with a rawhide chew:

Who knew a puppy had to be shown what to do with a chew?  After watching ally & Pepper, she finally got the hang of it:

Did you notice the size of the paws?  As the vet said, "those are some substantial paws"!

That's pretty much it in a nutshell.  Now all I have to do is catch up on what everybody is doing, and it will all be good!
Email ThisBlogThis!Share to TwitterShare to FacebookShare to Pinterest