I thought I posted this on Tuesday, but I guess I forgot to hit "Publish"!

The 2nd part of our weekend was pretty exciting.  We have a new member of our family.  Everyone, meet Laika: 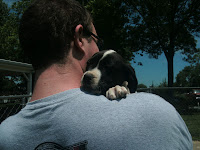 She appears to have chosen YS as her boy.  YS wanted to name her Laika in honor of the first dog in space.
She is such a "cuddle bug"!  Our other 2 dogs aren't real sure what to make of her:  at this point they pretty much run from her.  She has been trying to play with Pepper (our Jack Russell mix), but Pepper isn't that comfortable with her  yet.  In fact, Pepper has started growling at her when she's near.  I guess she's getting paid back for all of those times she gave it to Ally.
I told CH that she couldn't go through life as "Thong".

Her paws are HUGE, so she's going to be a big girl.  We haven't had a big dog in about 8 years, so it may get some getting used to.
Here are the girls being introduced to each other: 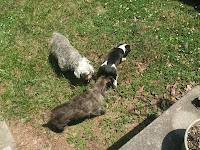 And Laika getting her first bath: 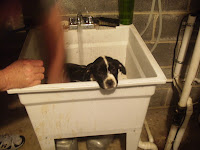 A few months ago, one of my coworkers mentioned that she thought her dog was pregnant.  We had been throwing around the possibility of getting another dog since we really don't expect Ally to be with us a lot longer.  The timing was "almost" perfect:  I only have a week and a half of school left, then I'll be at home during the day.  So, we decided to go ahead and take the plunge.  I think we made a pretty good choice!
Email ThisBlogThis!Share to TwitterShare to FacebookShare to Pinterest