Saturday morning, we got to witness this:

That's OS walking across the stage at his university, receiving his degree!  Yes, he has on chacos, his footwear of choice.  After the ceremony, we realized that he had done some paintball playing the day before...he had red paint on his legs!    There were times when we weren't 100% sure that he would finish college, but he persevered and did it!  While I watched him amongst the rest of the graduating class who were receiving degrees that morning, I thought back to the day we moved him in the dorm his freshman year.  He experienced so much in those 5 years; some good, some bad.  I'm so very proud that he stuck with it!
It was interesting to people watch.  There was the lady sitting behind us who wore this: 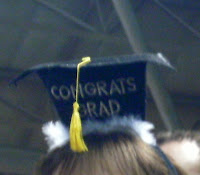 Then there was the footwear that other kids were wearing:
The green shoes: 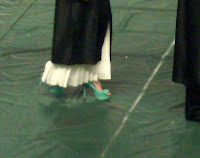 And the cowboy boots: 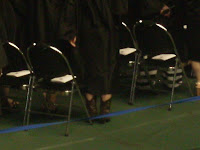 There was the photographer who brought her baby along for the ride:

OS with the information about actually getting his "sheepskin": 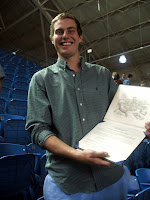 (He had already taken his gown off & wouldn't put it back on for me!)
After the ceremony, we were invited over to his Fraternity Big Sister's for barbecue.  It was just us and her family, but it was perfect for an after graduation meal! 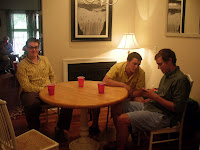 CH's brother was nice enough to come up so he could witness the big day! 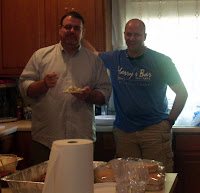 And to think we almost missed it!  I talked to OS on Friday morning, and asked him what he was going to do on Saturday.  He said he was going to get up and go to graduation.  I said, "but it's at 2:00", to which he replied:  "no, mom, it's at 10:00."  He sent me a text later and said that it would've been funny if we had missed it, so I replied back, "no, it would NOT!"  We left the house on Saturday around 7:00 a.m. and had to drive through some really bad rain to get there.  We actually got there in plenty of time.  CH's aunt and uncle who live in the area were also there.  Now the fun starts for him:  finding a job so he can start his grown up life.  Anybody know someone looking to hire someone with a degree in Marketing Management?
Email ThisBlogThis!Share to TwitterShare to FacebookShare to Pinterest
Labels: college, OS