Since I was too busy lazy to do a post on Friday, I'm going to include Thursday in this post!
On Valentine's Day, YS made his Orange Balsamic Glazed Chicken and Lemon Risotto for CH, me, and his girlfriend.  Since it was Thursday, I had flute choir practice that evening, and it wasn't ready before I left, so I had a late dinner.  He didn't disappoint!  It was delicious! I made a little something for dessert: 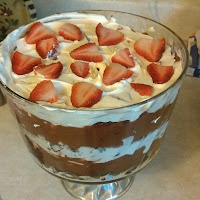 Chocolate Passion Bowl.  Really simple and very easy:  layer brownies, pudding (with a cup of cool whip mixed in), strawberries (or raspberries), and cool whip.  You could make a lighter version by using sugar free/fat free pudding and light cool whip.  A pound or marble cake might save a few calories, too.

At school on Friday, there were a couple of visitors: 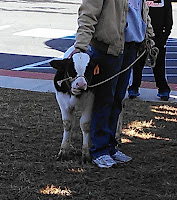 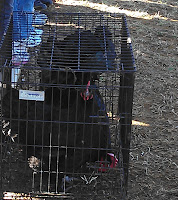 The calf was the sweetest thing.  One of my students pet her, which was a very big deal for her to do that.  When the Kindergarten Classes went out, I had a preschool student with me, so we went out to see them.  At first he didn't want to go, but he let me pick him up and we went out.  When I asked if he wanted to pet the calf, he said "I don't want to pet him.  NOOOOOO!  He might bite me!"  So stinkin' cute!

Friday night I got caught up on shows that I can't seem to stay awake for or have a conflict:  Deception, The Taste, and Suits.  CH watched "Skyfall" on the big tv in the Man Cave.

Saturday was grocery shopping, some laundry, and I managed to go by the library to get a couple of books I wanted to read.  One of the books is "Farewell to Arms" (Hemingway).  I chose that one because that was one of the books that the tour guide talked about when we went on the tour of the Hemingway House over Christmas Break.  I also got a couple of movies from Redbox:  "Hope Springs" and "Five Year Engagement".  I thought "Hope Springs" was really sad; I felt so bad for Meryl Streep's character.  There were a couple of scenes that I thought weren't necessary (and they made me a bit uncomfortable), but other than that, I thought it was a good movie.

I also popped a couple of batches of cookies in the oven.  It was so cold on Saturday, that Taco Soup was the perfect thing to make for supper: 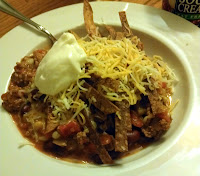 I made tortilla strips for the first time.  They came out pretty well, but I thought they were just a tad too spicy for me.

Sunday morning, the flute choir played during a church service at the director's church.  I thought we did pretty well; much better than we had done at the Christmas Concert.  The director said she was pleased, too.  Her church is about 45 minutes from my house.  I was about 15 minutes away when I reached for my pocketbook to get my chapstick, only to realize I had forgotten it!  I had no license, no money.  I just made sure that I didn't go over the speed limit, and prayed that I wouldn't be in an accident!  My sister, Tina, drove down for the service, and we went out to brunch.  She had to pay since I didn't have any money. I managed to get home safely and ticket-free.

The rest of the day flew by.  We went to dinner at our favorite Mexican place, and MS came from the big city to eat with us.    CH settled in to watch "The Walking Dead", and I watched "Downton Abbey".  Gosh, we lead such exciting lives!
Email ThisBlogThis!Share to TwitterShare to FacebookShare to Pinterest