~  Well, the big game was on Friday.  This is what I did instead of going to the game: 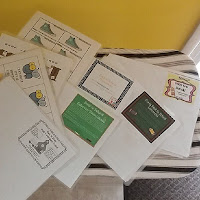 I didn't even watch it on tv....probably a good thing because Small Town got hammered.  YS & his g'friend came home after half-time.

~ I ran into a guy I knew from high school at the grocery store Sat. morning.  He & his wife were in town for the game; he was recognized for being inducted in the county Hall of Fame.  I don't think I'd seen him since a couple of years after I graduated.  What a great guy.  His mom was the guidance counselor at the high school when I was there.

~  One of my sisters' high school friends (and we were both in the Communicative Disorders Dept. in college...and I used to see her at the SC Speech-Language-Hearing Association Conventions) posted this on FB: 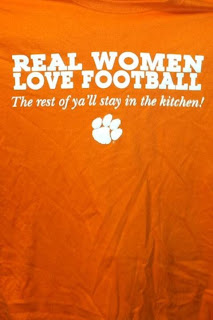 So true, so true!  Right color, wrong logo, though!

~  CH & I saw "The Butler" on Sunday.  Excellent movie.  I cried off & on during the whole thing.  After the movie,  we had questions about what was true and what was made up for the movie.  A couple of things that weren't true were a little disappointing, but I guess they need to embellish it for impact.

~  I made an amazing Banana Bread Cake over the weekend.  Someone posted the recipe on FB and I had to try it.  CH & YS really liked it; I think it has too much icing.

~   Amazon had Sandra Brown books on sale for $1.99 in their Kindle store on Saturday.  I ended up with 6 (or 7) that I hadn't read.  I'm really glad I caught the sale because Sunday they went back up.  And then on Sunday, they had Jefferson Bass book for $1.99.  Just in case you don't know who Jefferson Bass is (or, are since it's actually 2 people), Dr. Bill Bass is the developer of "The Body Farm" at the University of Tennessee.  Patricia Cornwall wrote a book about it.

~  And the savings continued over the weekend:  On Friday I received a notification on my phone that I had a 40% off Michaels coupon.  I found this neat thing to keep my speech cards in:

I had already decided that when I get more big sales coupons, I was going to go get more.  Weeeelll, yesterday I had a 50% coupon on my phone!!!  I didn't actually get to use it when I went to get one because it was on sale anyway.  But, I did have a 15% off coupon that I did get to use, so it was almost 50% off.  SCORE!!!

Here we go with another week.  Community Band and Flute Choir start back up this week.  Good thing I got ahead on my paperwork!
Email ThisBlogThis!Share to TwitterShare to FacebookShare to Pinterest