It seems like the only posts I'm able to get up lately are the wrap-up and the Wednesday Hodgepodge.  I didn't even do a Friday Frags on Friday!  I feel a little guilty linking up on Wed. & Fri. but not visiting very many blogs.  Hopefully that will change very, very soon.
~  I actually left school on time on Friday, and guess what?  I  didn't take anything home with me to work on!  Big, ginormous "WOO-HOO" for that one!  I had some running around to do before I went home (chiropracter, Target...you know, the important stuff!), and ended up with some seasonal goodies:  Caramel Apple Milky Ways, candy corn & peanuts (you can buy them already mixed up, but I wasn't sure how great they taste), Pumpkin Spice M&Ms, and Starburst candy corn.  I haven't opened the bag  yet, so if you've tried them, warn me first!  Don't you just love Targets' candy supply this time of year?

~  I didn't just buy candy.  They had a couple of movies I didn't have that were under $10:  Fried Green  Tomatoes and Leap Year.

~  Chinese Take-out was the perfect dinner after a long, busy week.  Then I took advantage of my Amazon Prime Trial and watched "What to Expect When You're Expecting".  It reminded me of "Love Actually" (which was on Sat. night) the way that the lives intertwined.  Really cute movie.

~  Saturday, CH & YS met CH's aunt's family and his brother at a town about 1 1/2 hours from here.  Since this was the 1st weekend since school started that I didn't have to do school work, I stayed home and took advantage of a quiet house.  I had some things to do in town (Dollar Tree-love that store!-, Shoe Carnival-had to get some decent shoes to wear with long pants, Michaels-they have the coolest storage case, Office Depot, and then a quick trip to Kroger for a few things), then I went home and did laundry and got the house cleaned up.  Vacuuming, dusting, and just a good cleaning up.  As I finished up the UT game came on.  My hopes were high, but soon plummeted.  I swear that was the longest game I've ever seen in my life!

~  I loved the weather Sat. morning.  We had the windows closed Friday night, so I opened them in the morning.  Sleeping with the windows open is one of my favorite things...as long as it's cool outside!

~  Sunday was another productive day:  I made 3 batches of cookies.  (By "made", I mean that I opened up the package, put the pieces on my stone, and baked them.)  I printed out some materials for the week, and laminated and cut them out.  I ran by Big Lots and bought another clock...this is my 4th clock in 2 years.  The first one fell off of the wall and broke, the second one was broken by a TA who was testing someone in my room (the student said she tapped the clock to show him the time, and it fell off), and the last one's hands just stopped moving.  I put in a new battery, but those stinkin' hands won't move!  Hopefully this one will stay on the wall and will work!  None of the clocks were more than $10, but if this one breaks, I'm thinking I may have to splurge and get a decent one.

~  I ran by Food Lion on the way home & got 2 boxes of Spice Cake Mix since Kroger was completely out on Saturday.  So...I managed to get a batch of pumpkin spice muffins made.  MS & his g'friend and YS & his g'friend all came for dinner (it's always our Mexican night).  AND, I talked to OS on the phone.

Which is him standing to the left of the same statue YS & I stood next to over the summer: 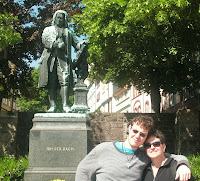 As we were looking through his pictures, it was pretty neat to see that I had taken pictures of the same thing!

All in all, an excellent weekend!  Hope yours was just as wonderful and productive!
Email ThisBlogThis!Share to TwitterShare to FacebookShare to Pinterest
Labels: Weekend Wrap-up