Whew!   What a weekend!  I got started on it just a few minutes later than I thought I was going to.  I had a meeting at 1:30 that ended up lasing for about 1 1/2 hours.  It ended right at the time we are allowed to leave.  I went back to my room, threw stuff down, picked up my pocketbook, and headed out the door for:
SISTERS' WEEKEND!!!
We went to a different cabin this time.  Last year, one of my SILs mentioned that one of her cousins had rented a cabin and the pictures looked awesome.  We looked at the price, and it was the same amount that we paid the last couple of years.
The drive up to the cabin was nice...until the very end of the drive.  It was a steep climb the rest of the way up, with a few switchback turns.  The worst part was getting in the driveway:  we had to make a hard left turn, and there was a bit of an upslope.  Coming down I would call it a "drop-off".  It was so steep that my wheels spun a little as I was went up the driveway.  Oh, but the view when we got to the top was just amazing: 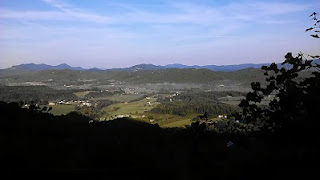 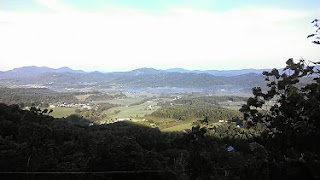 The sunsets were just as amazing: 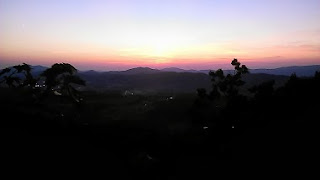 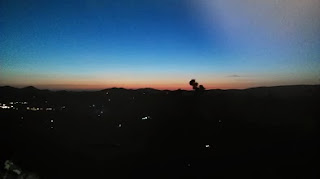 Friday night for dinner, we had french loaf pizzas (delicious!).  As usual, Friday night was full of talking and laughing.  Someone may have gotten some salad tossed on her, but she was just glad it was dry salad and not wine.
Saturday morning we had bacon, eggs, biscuits, and fruit.  Before breakfast, we enjoyed some coffee on the deck looking at the wonderful view. 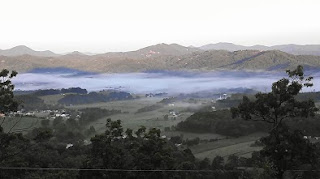 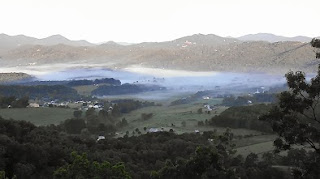 Not too shabby, huh?
We watched the UT game on tv Saturday afternoon, and did some reading.

(We're nerds that way!)
By that time, we had gotten "most" of our chattiness out of the way, so we spent the rest of the afternoon relaxing.  At one point, I went to the downstairs deck and sat on the swing...until I was about to fall asleep, so I moved to the bed and took a little nap.

For lunch, my SIL made these incredible ham & cheese sandwiches.  They were put on rolls, and had some kind of saucy thing over the top.  Did I mention how wonderful they were?

Sunday morning, we packed up and headed back down the mountain.  We stopped at a restaurant on "the peaceful side of the Smokies" for a breakfast buffet, then headed on home.
While the cabin was nice, it was a little smaller than we thought it was going to be.  All of us couldn't sit in the upstairs living area; some had to sit at the kitchen table.  Apparently the ride up just about did my Mom in.
Friday night, we (and by "we" I mean one of my sisters & SIL) realized we didn't have any potholders.  Saturday morning one of my other sisters called the office and asked if they could bring some to us, and she was told that we could come down and get them.  (The office wasn't just down the road...it was a good 3 miles-downhill-to it.  And then we would've had to go back up the mountain navigating the switchbacks.)  She told the employee that we didn't want to go back down the mountain until we had to, and was told that everyone was cleaning cabins so there wasn't anyone to bring them.  I didn't even think about this, but one of my sisters said that they used the same towels for the kitchen & bathroom, which is kind of disgusting when you think about it.  My sister also asked about toilet paper (thinking there was a chance we may run out) and was told that we were responsible for the toilet paper.  (It turned out we had plenty, which was a good thing!)
Saturday night, we tried to watch a movie, but the dvd wouldn't play.  I finally got it to start, and it played the previews, but then wouldn't play the movie.  It was an old dvd player...it also had a vcr in it.
The building was pretty nice, though.  4 bedrooms with a bathroom in each.  3 bedrooms had king-sized beds, and one had 2 queen (or maybe they were just double) beds.  There was a pool table downstairs.  The air conditioner and appliances worked fine.  We just didn't think the view outweighed everything else, so we don't think we're going to go back there.  We would have liked to have had the option to go into town and looked around, but didn't feel like we had that option after we got up to the cabin.
The weekend was just what I needed:  time away from work and the temptation to work (I didn't take my laptop).  And now it's back to reality!
Email ThisBlogThis!Share to TwitterShare to FacebookShare to Pinterest
Labels: sisters, Weekend Wrap-up