Much Needed Weekend Wrap Up

This was a very much needed weekend.  I took Friday off so CH & I could leave as soon as he got home from his 1/2 day at work.  We had a camping weekend planned close to where OS lives.  He told us about a campground not far from him, and since it closes for the winter at the end of the month & OS' birthday is in a few days, we chose this weekend.  We weren't able to get a site right on the lake, but ours ended up being decent.  There wasn't anyone right behind us, and there was a little bit of space for Laika to investigate.  And talk about your perfect camping weather!  Except for just a couple of very brief showers on Saturday, the weather was absolutely perfect:  Cool nights with warm fires and very comfortable days.

OS came by Friday night after he got off of work, and he had a surprise:  I have grand-dog!  His name is Sulty; he was found wandering around where OS works.  He said that he was in pretty bad shape.  Sulty has a chip, but apparently that's not a sure-fire way to get your dog back if you have one.  OS took him to the vet, made sure he had his shots, got him on heart-worm and flea/tick preventative, and tried to find his owner.  OS was able to trace it back to the manufacturer, but was unable to find his owner.  He is such a sweet dog, and very well behaved.  It warmed my heart to see OS with Sulty:  you can tell that Sulty adores OS. 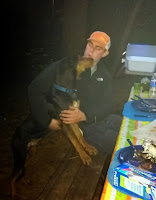 Sulty & Laika got along great, and Laika was able to get him to chase her around. (Her favorite game)

Soon after we got to the site, Laika zeroed in on something in the woods.  CH called her back before she got too close.  At first, he thought it was a skunk, then an albino squirrel, but it turned out to be a white squirrel.  OS said that they are all over a small nearby college.  It was the strangest thing.

Saturday morning, OS dropped off a canoe for us to use.  There was a waterfall  that he wanted us to see.  If I've ever been in a canoe, I don't remember it.  On a vacation to Hilton Head,  we (CH & the boys and I) took a kayak tour, but it wasn't a canoe.  Once I got over feeling like CH was going to tip the canoe over, I was fine.  In fact, it was most enjoyable.  On the way to the waterfall, we only saw one other person on the lake until we got to the falls.  On the way back, we passed a few families who were on their way to the falls.  The reflection of the trees on the lake was unbelievably vivid.  I couldn't get over how clear the reflection was. 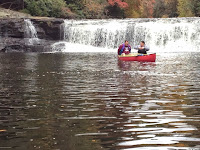 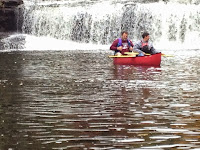 (The above pictures of CH & I are courtesy of the couple who camped next to us.  We really hit it off with them, and they loved Laika!)
When we got back to the campsite, we went into town for a couple of things.  We passed by a camper that was very "retro":

We saw this in the grocery store parking lot: 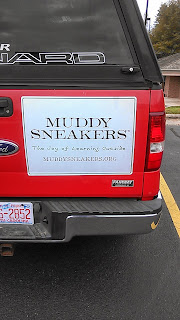 Isn't that a great name for an outdoor education center?

For the boys' birthdays, we usually have a family dinner.  This year, we fixed dinner at the campsite for OS:

We discovered that this definitely was not the best way to cook the vegetables, but the steaks were amazing.  We even fixed Irish Soda Bread in the Dutch Oven:

Our campsite through the campfire:

Sunday morning, I walked down to the lake to take a couple of pictures.  The mist hanging over the lake looked pretty cool.  This is an untouched picture: 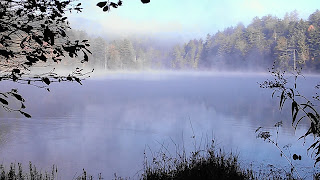 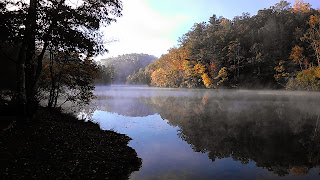 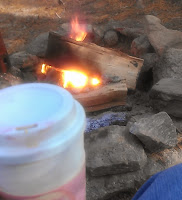 CH fixed biscuits in the dutch oven.  I have to say:  he's getting the hang of using the DO.  These were just about perfect: 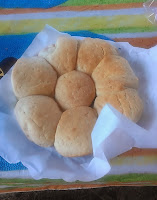 As we were "next door" talking to our new friends, we looked over to our table and saw this: 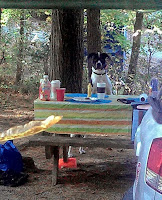 Just hangin' out, taking in some Sunday morning coffee!
Like I said, this was the perfect weekend; it was just what I needed.  I've had a lot of stress at work and have been so busy, I needed a weekend away from the temptation of using the computer, & a weekend to be disconnected.  We had really sketchy cell service, and had to go to the camp store for internet service.  And on top of all that, I got to spend some time with OS!
Email ThisBlogThis!Share to TwitterShare to FacebookShare to Pinterest
Labels: camping, CH, dogs, OS