1. What's something you're dealing with that might be described as tricky?
I have no idea.  (Aren't I off to an amazing start this week?)
2.  What's your treat of choice?
Funny you should ask.  I saw this yesterday in Kroger, and have no idea how it ended up in my cart: 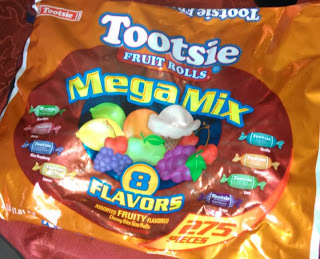 Seriously.  Did you even know there was such a thing???
3. Did you/will you carve a jack-o-lantern this month? Which real (living or dead) or fictional 'Jack' would you most like to meet in person? Why?
Nah.  I quit doing that a loooong time ago!  Hmmm...Jack Kennedy maybe.
4.  In your opinion, what's the grossest sounding word in the English language?
The "F" word.  I hate that word.
5. When did your heart last skip a beat?
When my daddy called a few weeks ago.  He very rarely calls me, so my heart skipped a beat when I heard his voice on the other end of the phone.  There was a dog that had gotten into their fenced-in back yard.  He had no idea how it got in there.  I had YS take some food down for them so they could feed him until they found the owner.  Daddy called me back a few minutes after YS had gotten down there to let me know that it was their back-door neighbor's dog!  He must've crawled over the fence.
6. Monster Mash by Bobby 'Boris' Picket, Michael Jackson's Thriller, Werewolves of London by Warren Zevon, or Ray Parker Jr.'s Ghostbusters...your favorite 'scary' tune?
I don't really care for "Thriller", although my boys are obsessed with the album cover: 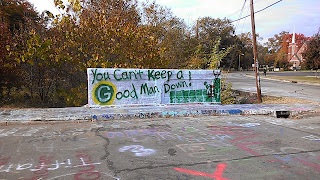 As you may or may not know, there is a Packer who is from the Small Town.  He played high school football with my 2 oldest sons, & I graduated from high school with his dad.  He was injured a couple of weeks ago, and will be out for a few more weeks.  I saw on his twitter post that the middle school sent him well-wishes.  He is definitely our hero!