Another weekend gone.  Friday after work, I went up to the high school to help the band boosters prep the concession stand.  By that, I mean I cut up tomatoes, chopped onions, and got the condiment table ready.  I didn't stay for the game since it was suppose to be so cold.  Plus, I had needed to bake some brownies for the bake sale at the band competition on Saturday.  And, I baked some muffins for the Hospitality Room for the competition.  YS & I had a nice dinner out, followed by a quick trip to the Dollar Tree. 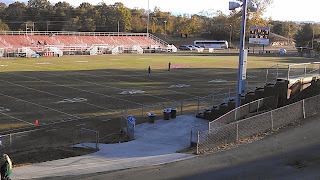 CH drove 7 hours to his high school alma mater, where they were celebrating 100 years of football.  Since I had taken last Friday off, I didn't think I should take that Friday, too.  Here is CH & his brother with their football coach: 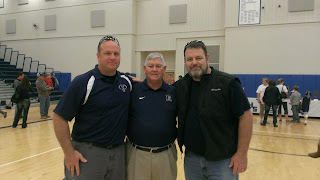 And, CH with the State Championship Trophy that they won: 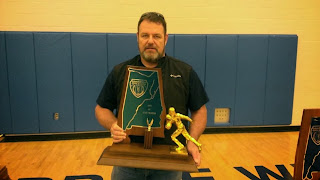 Saturday, I had to be at the high school by 3:00 to work in the Hospitality Room.  This wasn't a bad gig, let me tell ya!  I was inside, and away from the hustle and bustle.  For 5 years I worked concessions; this was much, much nicer!  Not to mention warmer.  I didn't feel the least bit guilty as I walked by the current boosters breaking down the concession stand.
I got to the school a little early so I could watch a few of the bands. 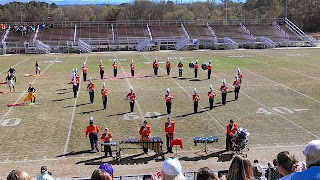 Small Town's band marched exhibition for the first time since the current band director has been there (which has been 9 years).  Even though I didn't have anybody out there, I was so proud of what that band has accomplished over the past 9 years.  9 years ago, there were only around 18 members.  It's grown to around 50 (or more), and they sounded soooo wonderful! 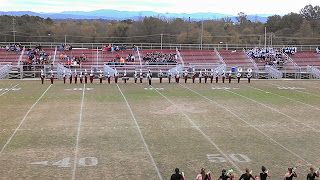 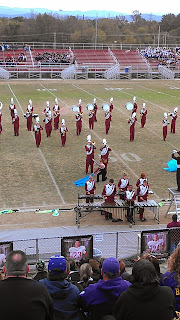 Yesterday was laundry, and catching up on "The Blacklist".  I also watched "The Heat" with Melissa McCarthy & Sandra Bullock.  It wasn't quite as funny as I thought it was going to be, but it was okay.

Hope you had a good weekend, too!
Email ThisBlogThis!Share to TwitterShare to FacebookShare to Pinterest
Labels: band, CH, high school, Weekend Wrap-up