This weekend turned out to be much better than I expected it to be.
Friday late afternoon I went to the high school to help the band boosters set up for concessions.  It was so good to see everybody; it felt like old times! 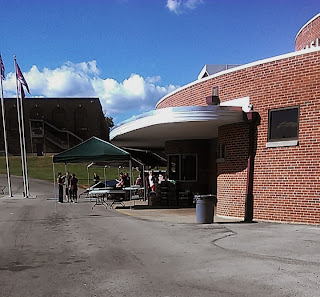 Here's the scoreboard before the game.  If you look in the background you can see the construction on the new high school. 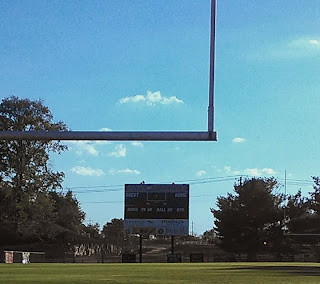 Saturday morning, one of my sisters came by and we went to a local coffeehouse.  I didn't take any pictures of it, though.  They roast their own coffee in the downstairs of their new location.  The new building is really nice; they were in an old house before.

After we had our coffee, we made our way to the Fall Festival.  It was pretty cool to wander around the Twin City's downtown area; it's not someplace I go to on a regular basis.  One of the stores that I definitely want to go back into: 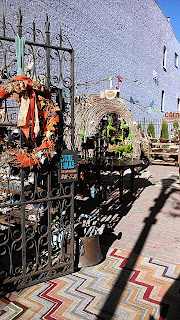 They had some pretty cool stuff:

We made our way through the vendors, and had to stop for the "Tractor Parade":

There was a blacksmith demonstration:

Fall decorations were in abundance: 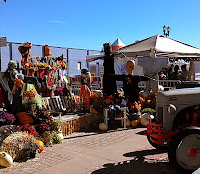 And there was even a pink tractor:

I learned a little bit of history that I didn't know:

And ran into another sister who was doing a basket-weaving demonstration:

She makes beautiful baskets; you may remember seeing this one that she made my Mom:

She even has one of her baskets in the possession of a Supreme Court Justice!  If you're interested in more information, email her at foxhollowcreations@gmail.com.  She mainly sells locally; I need to get her on facebook or Etsy.

Since she was a volunteer, she was given free tickets to the concert venue for the weekend.  Let me tell ya, the organizers did a great job with the music!  The headliner on  Friday night was Blues Traveler,  Saturday night was Kix Brooks & Lynyrd Skynyrd, and last night was Brett Eldridge & Rascal Flatts.    They weren't planning on going to Saturday & Sunday nights, so she asked if we wanted them.  CH & I went to the Skynyrd concert, and MS & his g'friend took the tickets for last night.  I was amazed at how many people were at the concert!  We lucked out and didn't have too much trouble finding somewhere to sit; we were quite a ways away from the stage, but they had 3 jumbo screens set up.  I think if we had been any closer, it would've been waaaay too loud!  (Guess I'm showing my age now!)

I don't know if it's just where we sitting, but the crowd seemed to be extremely well-behaved.  My sister suggested a place for us to park, and it was perfect.  We had to walk a little ways, but we had no trouble getting out on the road.  I'm seriously thinking that I may volunteer next year; especially if I get free concert tickets!

We had a relaxing day on Sunday.  I did some reading and just a little bit of laundry.  I even managed to get my clothes changed out for colder weather.
So...now it's back to the real world.  Fall Break 2013 is over.  Thank goodness it's a short week for me:  we had an Admin Day today (which is kind of like a day off!), and I'm taking Friday off so I can get things ready for a camping weekend!