Our parish had a Mardi Gras celebration on Friday. I guess it should have really been called a Carnival since Mardi Gras isn't until Feb. 7.  Even though I fought off a cold all week & CH came home feeling like his was starting, we headed over to the church. The planning committee did an excellent job with decorating the parish hall; it looked so festive! (This was the only corner of the room I could get that didn't have people!) 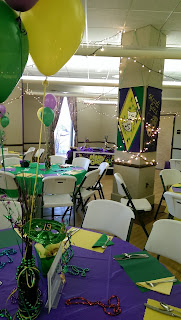 The celebration started at 5:00 with "social hour", then dinner at 6:00, followed by a band and dancing. And you know where there's dancing at a Mardi Gras celebration, there has to be a "second line"!
(The queen is one of the Sisters in our Parish. We have 2; this one is the one who works in the office and is the Spiritual Moderator of our CCW-Council of Catholic Women.) 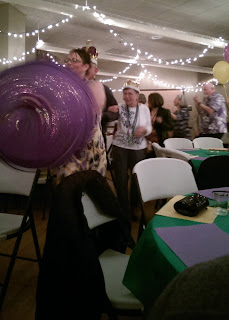 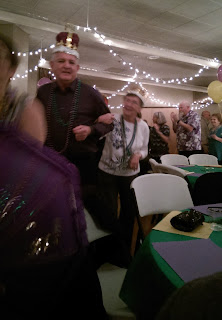 Let me stop here. I have to admit, I had no idea that it was called "second line". I had to look it up. I had only seen them in movies (Divine Secrets of the Ya-Ya Sisterhood) and on tv (specifically, NCIS New Orleans). How can you hear this music and not get up and start moving? Apparently these can pop up at any time in New Orleans. A website encourages participation, but warns tourists to watch their surroundings since the line could turn a corner and you would be in a not-so-welcoming neighborhood. Another website offers 5 Things You Need to Know, which includes the etiquette; such as: if you see a funeral second line, be respectful and only a spectator. Wedding Second Lines are for anyone to join in. Visit "official" and "unofficial" (aka, street vendors) businesses on the Second Line route. Oh, and don't be exceptionally drunk or obnoxious. (ha, ha!)
While I was looking for a video to include in this post, I came across several second lines for funerals. What a wonderful way to send someone on! It should be a joyous occasion. And I think I've decided that I have to have one for my funeral. :)
CH & I called it an early night and left rather early. I had been up since 5:00 am and, even though it was a good time, had a hard time keeping my eyes open. We met some new people, ate some King Cake (although I'm pretty certain it wasn't as good as MS is eating where he is; I know this because he told me the other day. I used to order them from a bakery down there; I guess it has to do with the freshness!), and participated in my first second line...Tennessee style. Participating in a "real" second line is now on my bucket list.
Oh, and just in case you read my Wednesday Hodgepodge last week and were wondering what I ended up taking as an appetizer: I used my Pampered Chef bread tube, put a loaf of Pillsbury French Bread Dough in it, baked it, then cut it. Then I put some already made bruschetta on it, some mozzarella on top and popped back in the oven for a few minutes. I probably should have put some oregano on top, but I didn't. I thought it was pretty good. (I was going to put in a link to the bread tube, but I guess they aren't selling them any more.) 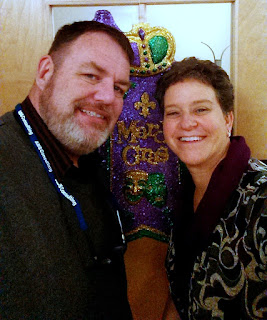