Thank goodness for long weekends! Friday was a weird day. I got to school before 7:00 because I had a meeting at 7:15. It was snowing when I left the house, but the roads were just wet. The buses were already on their way, so they had to continue on to school. We weren't supposed to get anything, so we were a bit surprised.

The view from my window.

Once school was let out, the roads were all clear, so there wasn't any reason for early dismissal. Some of the classes had their Valentine's Day parties early, which meant they were all hyped up on sugar all day, so it was pretty much a bust of a day for them.
Friday night was the first Stations of the Cross for Lent. There were only about 50 people there, if that many. My parish switches between Spanish & English for every other Station. It is a bit difficult to concentrate during the Spanish ones.

I had to run some bread over to church Saturday morning for a funeral, so I popped into the Adoration Chapel for a while. The light coming in and reflecting the stained glass onto the tabernacle was just beautiful.

The rest of Saturday was laundry. And then some friends on Facebook started talking about Broadchurch, which is a British tv show. I don't know why the British shows are so much better than ours, but they are. This one is excellent. I started off the show bawling my eyes out (it has to do with the murder of a 12 year old boy), and ended the first season the same way.
Sunday, CH & I had a couple of movie passes from last year that we hadn't used, so we saw Zoolander 2. Call us weird, but we think movies like that are hilarious. I was glad we didn't pay to see it, but CH said he would have paid to have seen it.
I've never been a big fan of Valentine's Day, so I fixed supper at home and we just laid low. I just don't see the need in buying stuff and fighting the crowds in a restaurant.

Yesterday we woke up to the roads being a bit of a mess. Thankfully, it was a holiday and we didn't have to get out. 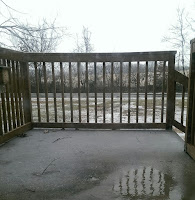 We have a 2-hour delay this morning (unless they end up calling the rest of the day off). It's better than nothing, I guess!