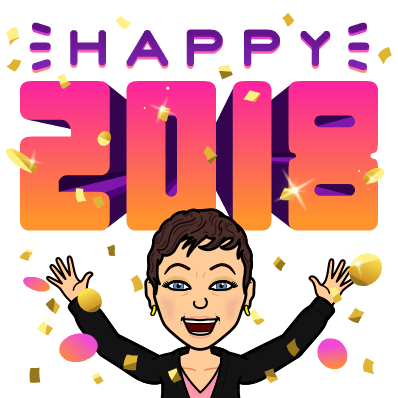 Happy New Year!
Looking back over the past year, so much happened. I have never been so glad to see a year end as I have 2017. Here are some of the highlights:
January started with a text saying my father had been admitted to the hospital. CH & I were on our way back home from a week’s vacation at the beach. We got home & I immediately headed to the hospital. He stayed in for a week, then went to my brother’s house where the plan was for him to get stronger so he could go home.
February: Exactly 1 month after he was admitted to the hospital, my father passed away. He never made it back home, but his passing was quickly and peacefully. My brother & I were in the room with him. It’s amazing what you can do when faced with the reality of life…and death.
March: Since both of our birthdays are in March, my Cooper SIL & I spent a weekend away in Chattanooga, which is almost halfway for both of us. It was a nice getaway for the both of us.
April: Cleaning out my parents’ house continued. A desk that my father refinished found a new home in my house and 1 thing that my oldest sister said she wanted was found.


June: The kitchen renovation from hell began. What began as such an excitement quickly became pure hell.
July: I had a great weekend in New Orleans meeting online friends at a conference. We had such a great time, but the weekend was over way too quickly. If you’ve met other blogging friends IRL, you know exactly what I’m talking about. It was as if we had known each other forever.
August: There was so much hype about the eclipse. We had a day off since it occurred at dismissal time. At first we were going to have a 30 minute delay start and 30 minute later dismissal, but that planned changed. Around here, it was a huge family event.
September: My kitchen was finally completed, and another Sisters’ Weekend was held. Everyone except for a SIL was there. We’ve started extending it by a day, which still isn’t enough time!

November: We went to my husband’s hometown for my MIL’s 75th birthday, and CH flew OS in. We hadn’t seen him since he moved to Washington last February. MS drove in from Baton Rouge; the only one missing was YS who was on call for work and couldn’t go.
We spent Thanksgiving with CH’s parents, and brother & SIL. My SIL & I went to a painting “class”, which we had done previous Thanksgivings when we spent the holiday at her house.
December: I wasn’t excited about Christmas; I had a very difficult time getting into the spirit, but once it was here, I got through it just fine. It was very low-key: MS & YS were home. I scaled back on the cooking and candy making so it was pretty stress-free.
We ended the year as it began: camping at the beach. It was quite a bit cooler & wetter than last year, but it was still warmer than home. And, it’s the beach, so there’s that!