We revisited St. Andrews State Park in Panama City Beach, Fl.  between Christmas & New Year's Day. Things were very much the same as last year, except the weather. This year was cold, rainy, and windy, but we made the best of it. We had 2 days of warmer weather, and we didn't let the bad weather deter us. We brought bikes with us this year and we rode almost every day.
CH & I 💖💖💖 the beach in winter. Most people I know don't even think about the Florida Panhandle for a winter vacation, but we absolutely love it.

The first day we were there was unusually cold and rainy. We stayed in our little trailer most of the day. CH caught up on a lot of sleep; I caught up on computer time and reading. In fact, the whole time we were gone I finished a book that I had started a while back and read 2 whole books. I finished the book Sweet Tea and Southern Grace (Glenda C. Manus)...it was one of those no-brainer, fairly predictable books that I started reading last summer. I only finished it because I had started it and I hate to not finish something I start. The other 2 books were excellent: The Girl with No Name (Diney Costeloe) and The Hangman's Daughter(Oliver PÖtzch).  If you like WWII/holocaust era books or are a bit obsessed with that history as I am, then you'll like The Girl with No Name. I couldn't put it down. The Hangman's Daughter's title is a little deceiving because the book wasn't fully about her; she was a minor character. This book takes place in 1600's Germany & is just fascinating. The author is a descendant of the main character (the executioner), but the book is fiction.

The first order of business was getting breakfast from the best donut place in the world (or at least the Southeast U.S.A.): Thomas Donuts.
Oh. My. Word. They seriously have the best donuts! You have to get there before 9:00 to get an apple fritter, which we did because we know the drill! My in-laws used to have a trailer a couple of blocks away from Thomas Donuts; whoever was the first one up was in charge of walking down and getting breakfast. After 4 days I still had a donut left (I wouldn't let CH eat any of mine!) and it was still delicious! (Oh, yes I did!) The only complaint I have about them is they have kolaches on the menu, except they aren't really kolaches. What they have is meat (such as sausage) in the middle of the pastry, which are called klobasniky. A true kolache has fruit on top. You can find an article that explains it here.  And now I've done my bit to preserve the Czech heritage! (Although I'm not Czech, my ancestors were from that area.)

We also waited all year to go back to Dat Cajun Place. We found it last year and were glad to see it is thriving. I had the chicken jambalaya plate...which was delicious.
Great atmosphere and fantastic food. If you go, make sure you have plenty of time...it definitely isn't a fast food joint. It's a great place to watch football and have a beer...or two.

One of the nice things about having our bikes with us was that we could ride along and see things that we wouldn't have seen if we were in the car. As we rode to the beach, I stopped to watch this gray heron:
While I was watching it, a deer came within 10 feet of me (it may have been closer...I'm horrible at looking at something and estimating how far away it is.) She looked at me, then slowly walked into the swampy area.

We also came across a turpentine still while riding our bikes. As many times as CH has been to this park, he didn't know it was there.

We had lunch with some friends (MS is named after their brother) one day, and some friends of my in-laws another day. We didn't cook nearly as much as we usually do because of the weather. We fixed pasta with sausage one night:
Of course, we had to have fresh shrimp one night. CH wanted to try cooking over a Swedish Fire Log, so we tried that.

They cooked really quickly with CH shaking and turning them constantly.
Here's the thing: I could taste gas on them. I don't know if it was the gas they put on the wick that is in the middle or what, but I was not a fan & I love shrimp. I'm very picky about what is cooked with gas because I swear I can taste the gas in some things that we cook while camping...mostly it's vegetables. We know not to cook it that way again! The log was pretty neat...once we got it going. We'll definitely get another one of those again. It burned just about the right amount of time for us.


Saturday we went to a farmer's market that is just over the bridge from St. Andrews. We went last year but there were more vendors there this time (probably because it wasn't New Year's Eve). Our favorite vendor was I Roll Lumpia. I had a couple of comments on the last Hodgepodge post asking what it is. I had no idea, either! Lumpia is a Philipino food, much like an eggroll, but I think the wrapper is a little thinner. The inside seemed to be mostly meat (as opposed to an eggroll that is mostly cabbage.)


It was so good that after we had a sample we started walking to the parking lot. I stopped to buy some more sugar scrub that I bought last year when we were there. CH said he was going back to buy lunch, so we turned around and had lunch. A very nice couple own the store; he is in the Navy but I think they have plans to market the sauce.
We only had one day when it was warm enough to take off my sweatshirt & just have on a long-sleeved t-shirt, so we took advantage of it by riding our bikes to the beach and taking a stroll.

Since we were riding our bikes we got to see a mama deer and her baby who were hiding in the grass.


We only had a couple of pretty sunsets. We missed the first one because we were driving back to the park after visiting with my in-laws' friends, but the second one made up for it.

I don't remember ever seeing the water there being so clear. It looked like pool water: 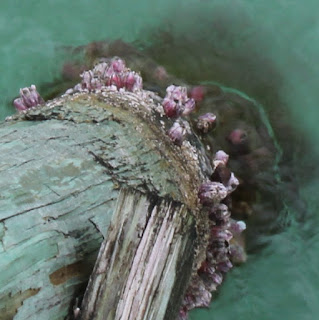 I played around with my camera a little as I stood at the edge of our campsite: 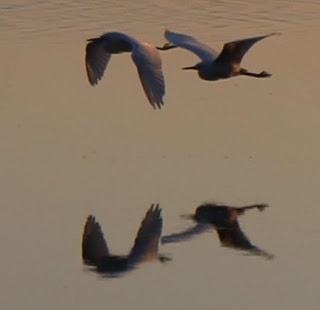 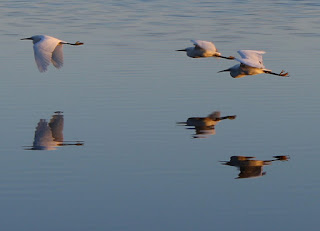 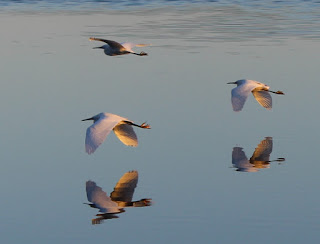 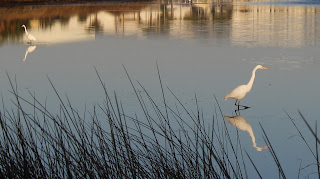 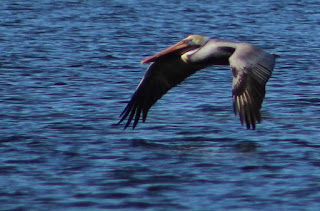 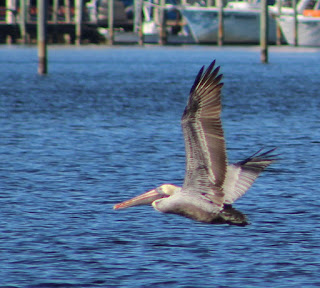 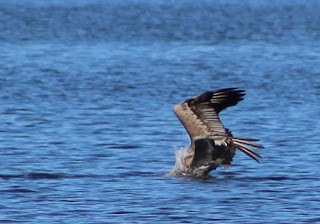 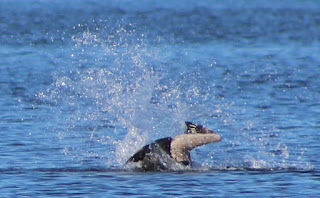 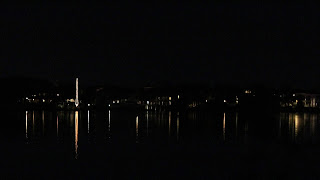 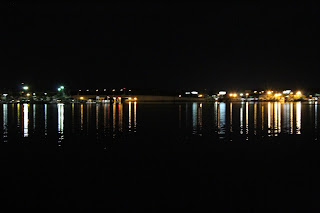 As I mentioned in last week's Hodgepodge, the family that came in next to us was super nice. I was pleasantly surprised to learn that she is a blogger. With it being so cold and rainy, we didn't have a chance to talk very much. They originally were going to camp with some friends of theirs, but the friends didn't make it because of illness. They made reservations at a restaurant for New Year's Eve and didn't change it, so they invited us to dinner. We said yes, but we made the huge mistake of going to Dat Cajun Place for lunch. We ate way too much, and the weather was cold, rainy, and extremely windy, so we opted to stay in our cozy little trailer.  (We're partiers that way!) We got up the next morning, packed up in some extremely heavy wind, and headed to CH's parents' house to spend the day. The next morning we were back on our way home. All in all, a wonderful, relaxing vacation!
Email ThisBlogThis!Share to TwitterShare to FacebookShare to Pinterest
Labels: camping, cooking, history, vacation