Technically, we weren't in London for our 4th day.  We took the tube to Waterloo Station and then got on a rail to meet some friends in Surrey.  CH had met this couple during the summer of 2010 out in Colorado; they just got back home a few weeks ago from riding around the world on a motorcycle.
We didn't have any problem finding the right train and boarding...in fact, we made it just in time so that we didn't have to wait. 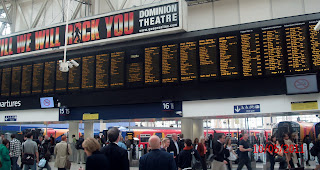 Approximately 30 minutes later, we were in Woking: 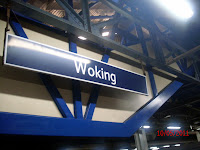 CH & I had a discussion about whether or not you could use the Oyster card on the rail.  I didn't think you could, CH thought you could.  Guess what?  You can't; not to Woking, anyway.  They allowed us to buy tickets-both ways- once we got there, which actually saved us a little bit of money since by the time we got there it wasn't rush hour.
Our first stop:  Shere, Surrey.  We walked down into the village; this was one of the first houses we saw: 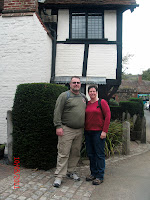 Look just above CH's head, on the gutter pipe.  I thought this was really cool: 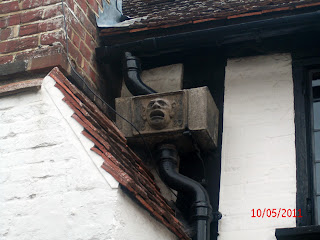 As we walked down the street a little ways, we came across this building: 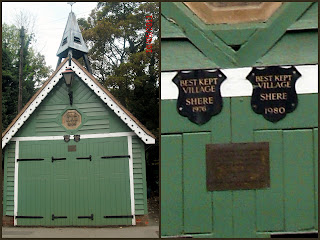 The building used to be a firehouse; now it houses public bathrooms.
If you're a fan of the movie "The Holiday", you'll be familiar with Shere.  Parts of the movie were filmed there.  I went back and watched the movie again, and noticed more of the village than I originally thought were in there.  The most memorable site was the pub The White Horse: 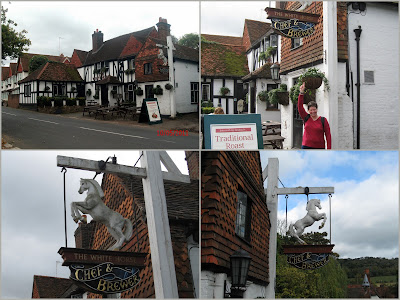 The inside was charming.  Unfortunately, I didn't get a picture of the fireplace (which was beautiful, by the way) because there were people sitting in front of it.  Just think:  I touched the same door that Jude Law touched!
We walked across the way to St. James' Church.  The church dates back to 1190.  Some of the tombstones were so worn that you couldn't read anything on them.  By the way...this church can also be seen in the movie (as well as Bridget Jones' Diary:  The Edge of Reason)! 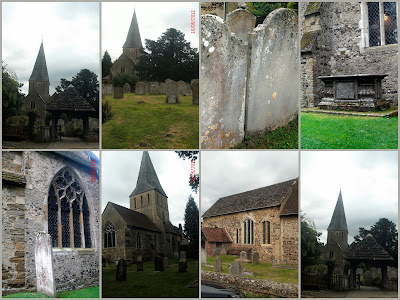 The minister was there, so we had an opportunity to talk to him for a little bit, until a school group came in.  If you look closely, you can see where the rope for the bell has worn down the stone: 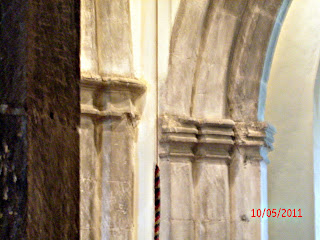 Another cool thing in the church:  This is a bronze Madonna and Child that was dug up by a dog in 1880. 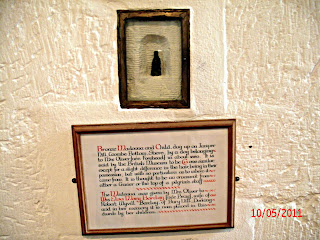 Here are some pictures of the inside of the church: 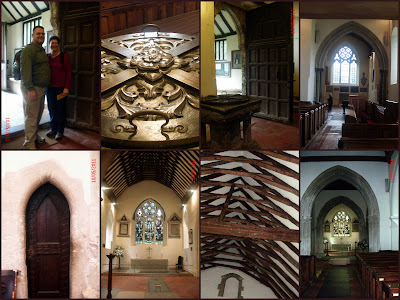 Here are a few pictures of the village of Shere: 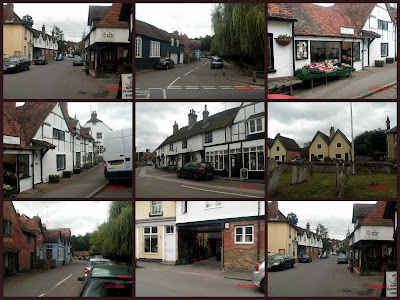 And some of the houses in the village (if you look closely in The Holiday, you'll see them in the background): 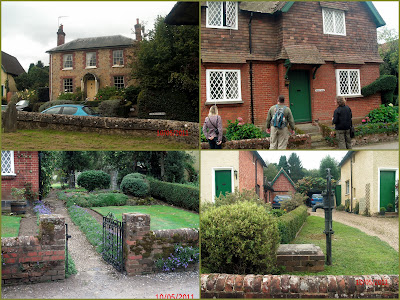 We did some driving around Surrey after that, and had lunch in a pub near our friends' house.  In the movie "The Holiday", there's a scene where Cameron Diaz is driving down a narrow road when she meets a car and a truck.  We lived that scene.  Seriously.  I looked at Jane and asked if John was going to be able to get through.  He did.  I don't know how, but he did.
As an added unexpected bonus, they took us by Waverly Abbey, near Farnham. This Abbey was the first Cistercian Abbey in England, and was founded in 1128.  King Henry VIII dissolved the Abbey in 1536. 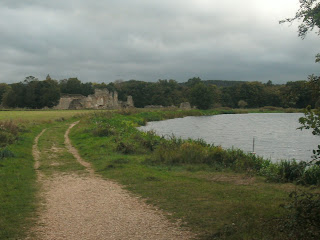 The buildings that are still standing were amazing. 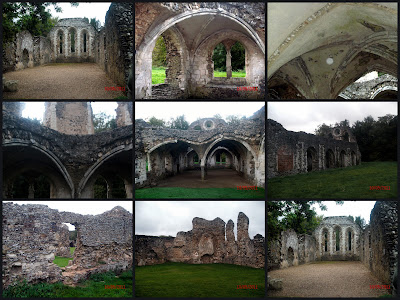 We even managed to use the timer on the camera and get a group picture: 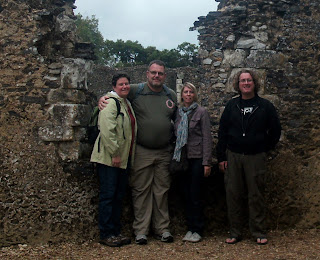 I made the comment that Waverly Abbey was better than seeing Stonehenge, and our friend mentioned that it was a lot less crowded, too.  The Abbey is in the middle of a cow pasture, so we had to watch where we stepped.  It was a great find, and we really appreciated our friends taking us out there.
Before we left, CH called to me to walk back to the river (turns out it is the River Wey), and we saw some remnants from WWII: 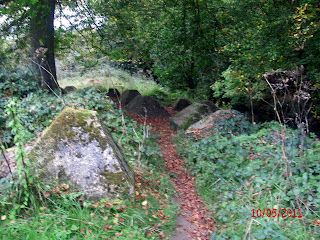 According to Wikipedia, " It was said that the large open space, formed by the curve of the river on one side and the lake on the other, was intended to be a "tank killing ground" for any German army intending to outflank London's defences."
At  the entrance of the Abbey, there are a couple of "pill boxes" (brick gun emplacements): 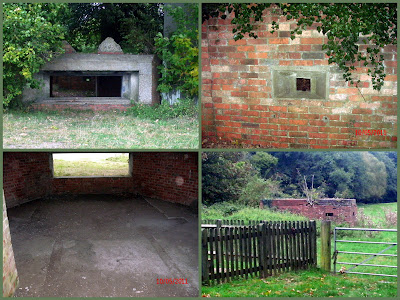 After driving around a bit more, we ended up at our friend's house.  It was a beautiful house that was built around 1825.  Her garden was gorgeous.  Unfortunately, I didn't even think about taking a picture of it before it got dark.  While we were at their house, we had our only good rain the whole time we were there.  By the time we left to go back to the train, the rain had stopped.
This was our "late night out".  We got back to our room around midnight.  On the way back to the hotel, we had our only incident when we thought someone might try to pickpocket us.  The road in front of our hotel wasn't very well lit, and there was a guy who was following me awfully close.  CH told me to hold up a minute in front of a department store, so I stopped and commented on the light in the store.  The guy went on ahead of us, but he looked back a few times.
I hope you enjoyed the pictures from our outing to Surrey.  It was unbelievably beautiful.  Just like the movies.
Email ThisBlogThis!Share to TwitterShare to FacebookShare to Pinterest