I haven't participated in this meme in a while, but school's back in full swing, so I've got some things to say.
1.  To the woman who chose to go through the express lane with a buggy full of  groceries.  HELLO?  Are you stupid or just don't give a rat's butt that there are people coming home from work who would like to get home?  Nothing against SAHM, but this woman looked to be one, so she could've gone to the store at any time during the day.  But NOOOOO, she chose to go when people who work are getting off, running by the store for just a few items are there.  I really, really hope she saw me look up at the "Express Lane  15 Items or Less" sign.  I don't think she would've cared, though.  And, yes, when the cashier asked me how I was doing, I responded with "Well, I'm pretty frustrated right now."  Smart guy...he knew better than to say or ask me anything else.  Plus, I think he gave me a couple of extra scratch-off cards.

2.  To whoever chose to grab a candy bar that was in the lounge without putting in a dollar:  YS is selling them as a fundraiser...not a give away.  Seriously...you work in a school.  We are trying to teach kids integrity, and you choose to just help yourself?  Yes, it's only $1, but what if everybody did what you did?  And, if you didn't have a dollar on you, you could've just let me know that you would be paying me later.  ( I realize that when I leave school on Thursday I will probably have an extra dollar in there, because I have a sneaky suspicion that that is exactly what happened.)
(Okay, I have to do a PS here.  As I was getting in my car Wed. morning, I counted the candy bars and I had 10, not 9.  So, no one got a bar and didn't pay me.  I just don't know how to count to 10.  I thought about  deleting #2, but then I thought, "no, if people  are reading, they need to know what an idiot I am!  If I lose a few followers because of my idiocy, so be it!)

3.  To MS:  I absolutely love walking by your room and see it looking like it did before you moved into the dorm.   I was going to wash the sheets on your bed over the weekend, but decided against it when I saw this: 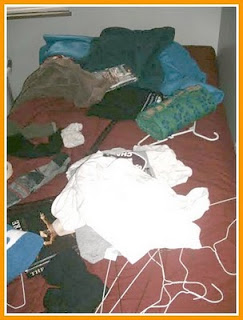 This prompted a phone call to you to tell you need  to come home at some point and clean your room, which prompted you to tell me to tell YS to do it.  Uh, no...I think not.  I refuse to clean up something that should've been done before you moved into the dorm.  It will be waiting on you when you come home...and I know at some point you will come home.


And that completes my rants for the week.  Hopefully I've made you realize that you have a lot to be thankful for, or maybe I've even made you chuckle.
In the words of a friend:  It's "Little Friday"!
Email ThisBlogThis!Share to TwitterShare to FacebookShare to Pinterest
Labels: band, fundraiser, grocery, MS, Thank you, YS