The following is only my opinion.  I did not receive reimbursement of any kind for my review. 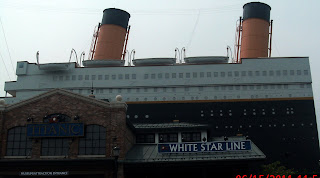 Yesterday, YS & I played tourist in a nearby tourist town.  This museum opened up a year ago, and we hadn't visited it yet.  When you get in line, a "crewmember" gives you a boarding pass:

On the back of the Boarding Pass is a name of a passenger or crew member.  (This reminded me of The Holocaust Museum in DC.)  Throughout the museum, you looked for your name in the displays.  YS had a young man who was a first-class passenger and was a bit of a playboy; he did not survive the accident.  I, on the other hand, was a 19 year old with a 10-month old baby; we were 3rd Class Passengers: 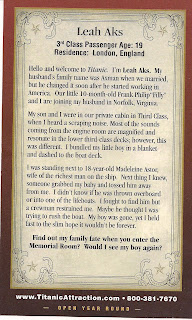 In case you can't read it (you can try clicking on it to enlarge), Leah Aks was headed to Norfolk, Va. to meet her husband.  While in her cabin, she heard a strange sound, wrapped the baby in a blanket and made it to the top deck.  John Astor's wife grabbed the baby and put it in a lifeboat.  I went through the whole museum and saw several things on Madeleine Astor, but nothing on Leah.  At the end of the museum, there is a wall that lists all of the passengers.  They are divided by which class they were, then if they survived or perished.  Leah and her baby were both on the survivor list, but I didn't know how they were reunited.  On my way out, I asked one of the workers, and found out that they were reunited on the Carpathia, the ship who rescued the survivors.
I googled Mrs. Aks, and found out that her great-granddaughter lived in Knoxville at one time.  Mrs. Aks gave her daughter the middle name of "Carpathia".  I also found out that, while on the Carpathia, Mrs. Aks walked by a woman with a baby, and she immediately recognized it as hers.  She went to the captain, who required proof.  The baby had a birthmark on his chest which was confirmed, so the baby was returned to her.
I expected the Grand Staircase to be scaled to the real thing, for some reason.  It was beautiful, but small.  I think I expected the museum to be set up as the ship was, so that was a tad bit disappointing, too.  The artifacts from the Titanic were interesting to see, but they seemed to have the same things in every room.  They have one room set up so you can feel how the air felt that night, and how the water felt.  There is no way that I could've survived even for 5 minutes in that water.
The Titanic Experience had interesting points to it.  Would I go again?  Probably not, but I am glad I went once.
Email ThisBlogThis!Share to TwitterShare to FacebookShare to Pinterest