The weekend started off calmly enough:  YS went to a jazz concert with a friend, so it was just CH & me for supper.  After we ate, we watched a Christmas show on tv; I promptly fell asleep and missed most of it.

Saturday morning, I ran to WalMart at 7:00 to get some pantyhose, thinking that it would be the perfect time to go before it got all crazy.  So...I get there, and it's "Shop with a Cop" day.  In case you don't have this in your area:  kids from disadvantaged families pair up with a police officer.  Police Officers from both towns in the county, plus the sheriff's dept. are involved.  The kids are given around $190 to buy things for Christmas.  Some of the kids buy for themselves, and some of them also use the money to buy for parents or siblings.  I couldn't help but over hear the boy who was in line behind me.  He said he couldn't wait to get home to play with his toys, to which the police officer replied that the toys are for Christmas, so after they paid, they were going to get the toys wrapped up for Christmas.  The little boy looked to be about 6 years old, and he didn't quite understand the whole concept.  I think Shop with a Cop is a good thing, but I felt for that child who had just gone shopping for toys, but had to watch as they were wrapped.

Later that morning, we went to the Christmas Parade to see YS.  I have to say:  I'm not a big fan of parades. While we were waiting for the parade to start, we saw this coming down the street: 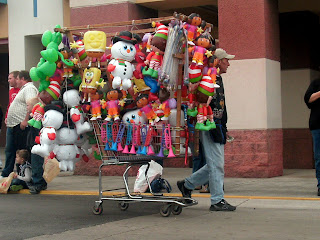 And, there were 2 more behind him.  We didn't see any takers.

I saw the cutest little girl in her tights and tutu:

Her sister was dressed identically to her. 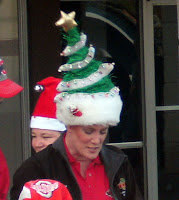 When I turned around, I saw this area decorated:

This is the "stage area" for an event called "Slim Fest" that raises money for "Shop with a Cop".  I've never gone because it's held in August, and it's just too hot to be sitting out in a parking lot with a LOT of people.

We saw a really cute float from a pediatric dentist in town...the employees were all dressed as tooth fairies: 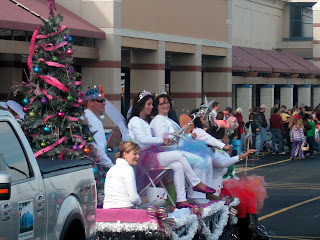 The "Friends of the Library" float had someone reading "The Night Before Christmas" while riding down the street: 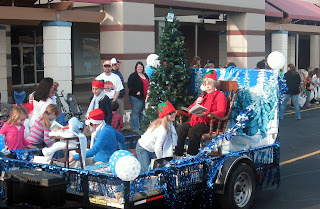 And, about halfway through the parade came the main event (for us, anyway):  The band.  A few years ago, the organizers of the parade decided to give out awards, and one of them was "Best Band".  3 awards were given, and 3 bands participated.  Since Small Town is the smallest band, guess who got 3rd?  The band directors got  together after that and decided to have 1 big band consisting of the 3 bands who participate.  It was really neat to see 3 of the 4 bands in our county marching as 1, with the different uniforms all mixed in together. 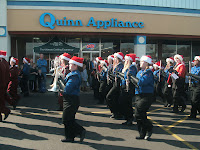 BUT, the neatest thing was seeing YS, along with the 4 drum majors from the other 2 schools, leading the band:

He had to have been hot; the temperature got up to around 70.  He'll possibly have one more official function that he'll direct in; the spring trip.

We had a quick lunch, then got ready for the flute choir concert.  As I said on Friday, the church is GORGEOUS.  It was dedicated in 1913, which is ancient as American Churches go.
The outside of the church (for credit, please click on the picture): 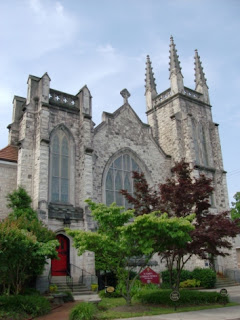 The inside of the worship area is actually quite small, but beautiful:  (I took these pictures) 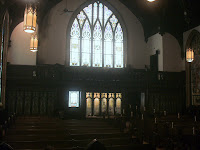 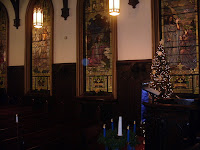 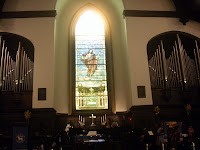 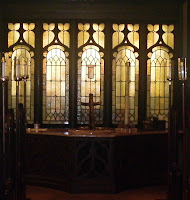 Sorry for the darkness in the first picture.  In the last picture, the cross is at the Holy Water Font (I think that's what it is, anyway).  I had to google to see if Lutherans have Holy Water, and apparently they do, so that must be what it is!  Anyway, the holy water actually flows down the middle of the cross into the font.  Very cool.
I had a very nice surprise:  sitting in the front row was my brother and his 2 boys.  In the row behind them was his wife, their daughter, a friend of their daughter's, and the friend's little sister.  It was so nice to have a support system there!
After the concert, we stood together for a picture, although one of the members had already left: 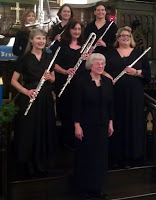 You can get a glimpse of the contrabass flute in the back row.  (The picture is compliments of CH!)
Here's a sample of the concert:

At around the 2:11 mark, you can hear me play the lower part.  And again at around 3:25, I have the moving part for a couple of measures.

After the concert, we left and went down the road for CH's company Christmas Party.  There is a couple that we've hung out with the past few times:  she actually graduated from Rival High School, and her dad was the band director there.  AND, her brother did his internship in band at Small Town when I was in high school.  Very nice couple, and she mentioned that she's thought about starting a blog!  Wrong thing to say to me!  I offered to help her get started (so...if you're reading this:  DO IT!).  I know she'll do great if she decides to do it.  It looks like my SIL has decided not to start one, so fingers crossed on this one!

It was actually an early night:  the party was from 4-8, and we ended up leaving around 7:30.  They had a man drawing caricatures there.  Here's ours:

I don't think it looks too much like us, but everybody else seems to think it does.

To wrap this up, CH & I were in the living room when Laika & Pepper went to the window to have a look outside.  At first they were right beside each other, but they moved when I reached for my camera.  This is almost as cute, though: 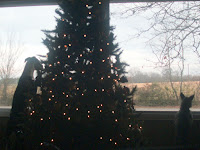 We're 1 week closer to Christmas.  Now that concerts are over, I need to buckle down and get my list for my candy making/baking ready.  Is anybody else way behind with their preparations?
Email ThisBlogThis!Share to TwitterShare to FacebookShare to Pinterest