WHEW!  I'm really glad this week is a short week, because I'm going to need some rest after this weekend!

I have to address the horrific event in Newtown, Connecticut:  As I listened to reports (some wrong, some right), I just kept seeing the faces of the students in my schools.  Those sweet, innocent faces who are getting so excited for Christmas.  What happened there could have happened anywhere.  CH & I talked about the security in my schools.  Even though the doors are locked (except for the front doors), are we really and truly safe?  I can see the glass doors becoming a thing of the past.  School is the one place where kids are suppose to be safe.  The sad reality is that some kids don't feel safe at home, but at school they're suppose to feel safe.  School is a happy place, filled with laughter, learning, and little faces that have amazement and wonder.  One of my sisters asked how they kept the news out of the schools on Friday, and I told her I had no idea anything had happened until a teacher showed me a text she had received from somebody.  The heroes, the teachers, in that school went above and beyond their job description.  They showed that teaching isn't just a profession...it's a calling.  It seems very strange that as chaos erupted in that school, the 1st graders in one of my schools was on stage, performing "The Polar Express" for parents. 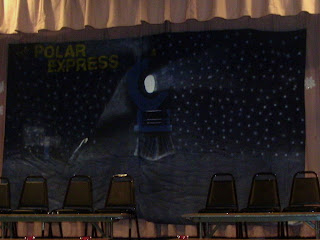 Friday night, I made 4 miniloaves of these:

Eggnog Bread with Rum Glaze.  I was a bit worried about how they were going turn out, because the recipe says not to overmix when you mix in the dry ingredients.  It seemed like it was all of a sudden that it overmixed.  You're suppose to "pour" the batter into the pans, but I ended up having to spoon it.  Next time I'll hand mix it (instead of using the mixer) and see if it does better.  Oh...the recipe is here.  And it's good...especially the glaze!

Saturday was a family get-together at my sister's house.  I took her one of the mini-loaves as a 'thank you for hosting' gift.  In one of my posts last week, I asked for some appetizer ideas.  I got a recipe in my email that seemed perfect enough:  Garlic Chicken Puffs.  Chicken, garlic, cream cheese, crescent rolls:  these are a few of my favorite things! 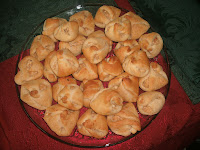 I cheated a little bit and used the Perdue Short Cut Chicken-Southwestern Style, and used my Pampered Chef manual food processor to "shred" the chicken.  Super easy and super good!
I won't bore you with all of the pictures, but here is the hostess with a present from my brother & his wife: 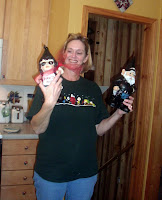 (She & her husband ride Harleys.)
My sweet niece who just got back from a swim meet (and placed FIRST in one of the events!): 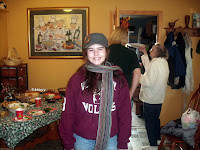 She's growing up way too fast!
And, she made all of the aunts a keychain.  She put in a lot of thought to everybody's; they were all personalized.  Her twin brothers made cookie mix for everybody: 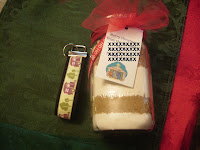 After we left my sister's, I ran by the store to get a couple more cans of crescent rolls to make more garlic chicken puffs to take to a friend's party.  (They were that good!)  Then, we went to party #2 for the day.  I had never been to the friend's house before.  She is the band booster president and has the kids over all the time.  Their house sits on top of a gigantic hill, and they have this amazing view.  Her house is just amazing.  I really, really wish I had taken my camera, because their main Christmas tree was huge...and beautiful.  I said "main" because I think she had a tree in every room except the bathrooms.  She has 2 girls, and their bedrooms look like princess rooms.
The party was a conglomeration of their friends, neighbors, and band parents.  One of my brothers went to school with a couple of her neighbors, and there were a couple of other band parents there, so we knew a few people.  At one point, CH & I were standing near the kitchen talking, and the hostess whistled (this loud, piercing whistle) and introduced us.  There are no strangers in her house!  It was a good time, I just wish that I had taken my camera.  I asked her daughter how long it took them to get the tree up, and said a few weeks. She said that she & her sister were told they couldn't go anywhere or do anything until the last 2 rows were done, so she said those took a couple of hours.  The tree was that big, y'all!  Her home was so nicely & tastefully decorated.
It was a good day, topped off by a surprise!  (Well, I knew it was coming, but I didn't know when it would be here.)  April at Straight from the Heart had a giveaway a few weeks ago, and I won!  I don't win stuff very often, so it's so exciting when I do!  The bounty was a "May Book".  They sell books, cards, notes, etc.  I was able to choose the design I wanted on the outside, as well as the inside.  You can choose between lines (notebook), agenda, dots, etc.  The books have a sewn binding, you know, like the "old" days!  I chose a book with lines, and this pattern:

(The picture is from their website...I couldn't get a decent picture of it.)
So, you can see why I was excited when I saw this in the mail: 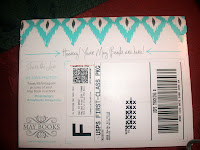 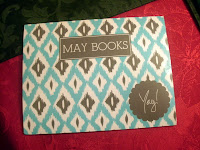 Last night, CH & I went to a friend's husband's business holiday drop in.    It was at this little place called "The Market".  They sell a lot of local/regional goods, fresh goods, and organic goods.  AND, they have an excellent beer selection.  This was another party with a mixture of people there.  It was a good way to cap off a busy, but wonderful, weekend.
Last Thursday, one of my schools had "Hoops for Heart".  There is a small college in the Rival Town, and some members of their basketball teams come up and help out.  I'm not real sure about the whole details, but I did manage to sneak in for a few minutes and watch the kids getting all rowdy dancing to the music.  The PE teacher shared this picture with me:

That would be me, Ms. Principal, and a teacher (who just happened to go to high school with my youngest brother...small town, small county!).  The little bit of time I was in there was a lot of fun!
Have a Marvelous Monday!