~  Does anybody else think it's a bit weird to hear Barry Manilow singing Christmas songs?  Especially since he's Jewish?  Or, maybe he converted.  It still isn't as creepy as hearing Karen Carpenter singing "I'll Be Home for Christmas".

~  As I was wiping down my door handle, one of my 3rd graders asked me if I was "a germaphobia".

~  I've been listening to Christmas music via Songza.  The categories that I've been listening to have "Fairytale of New York" by The Pogues.  Every time I hear that song, I picture the look on Kathy Bates' face when part of the song is played in "P.S., I Love You".  A friend who is married to a Brit said it's a big-time song in Great Britain.

~  This morning, I noticed one of the 3rd grade teachers looking in the mirror.  I stopped and said, "You look beautiful!"  She told me that she didn't put makeup on that morning, and that last time she didn't wear any, one of her students asked her what was on her chin, and she proceeded to explain to him that it was zits/pimples.  He told her she needed to cover it up because it was distracting him.

~  I got this in an email from my sister.  A co-worker passed it to her. Apparently this is going viral:


My mother and I had braved the mall (on a Saturday in December of all days) in hopes of capturing a picture of my 8 month old son, Kiptyn "meeting" Santa. We stood in line for over 30 minutes waiting for our turn. Of course, 5 mins before our turn to meet Santa, Kiptyn fell asleep!! Part of me thought we should just get out of line & avoid wasting anyone else's time that busy Saturday, but as we went to leave Santa gestured us over. I handed Kiptyn to my Mom & grabbed my camera. I was escorted outside of the fenced area in order to snap my own shots. What happened next will be one of my all time favorite memories of Christmas... Santa grabbed his book & slowly laid back into his oversized chair. He then silently motioned for my Mom to lay Kiptyn on his stomach. Kiptyn stirred for a moment and I thought he'd wake for sure. Santa hushed him & Kiptyn's little arms fell into such a peaceful position. After we finished taking pictures we heard a round of applause from the crowd that had gathered around below & above in the rotunda. I just wish this jolly ol' man could know how truly special he is. I can honestly say that I believe in Santa and the magic of the holiday season again. I'd just like for everyone to see how special the Santa at the Boise Towne Square mall really is. Happy Holidays to all! 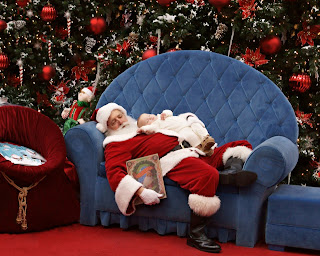