Weeeell, I was planning on doing a "Friday Fragment" post, but it appears that Mrs. 4444 has decided not to continue this series. Funny, her reasons for not blogging mirror mine!

Nobody has offered to pick the series up, so I'm on my own!

~ There's a lot of controversy over this new logo for the state of Tennessee:

It took somebody 9 months to come up with this, and the state paid $46,000 for it. Honestly???  I'm no graphic designer, but I could've done better than that using Word, I could've done it an hour, and I wouldn't have charged anything for it! The Tennesseean (Nashville newspaper) is conducting a poll: 94% thus far have said they don't like it. They pretty much paid a teacher's yearly salary for this monstrosity.

~ There has been a change at the swimming pool.  This is what it looked like when the pool first came into being:

(For photo credit, link on the pictures)

This is what it looked like a few weeks ago: 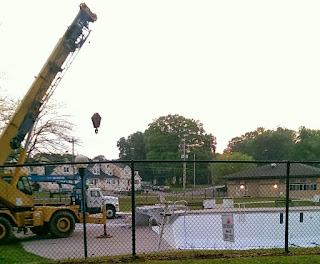 It's so sad to drive by and see "the tower" gone, but apparently the concrete had eroded to the point of not being safe, and it would cost too much to repair.

~ Orange is the New Black is on Netflix starting today! Yeah, looks like not a lot is going to be accomplished today!

~ I read another book yesterday. This one is actually in the "YA/Middle Grade" genre. The librarian at one of my schools said that that genre was good to read because of the restrictions that are put on those authors. Caught is the 5th book in The Missing series by Margaret Peterson Haddix. When MS was in elementary school, he got hooked on The Magic Tree House series. I sat down one day with one to see what was so fascinating about it, and I ended up not moving until I had finished it. The Missing is along those same lines, just for an older audience. It was actually quite good, once I got into it. Reading the first 4 probably would've helped, but it's not necessary! Now I'm on to the next book!

Hope everyone has an awesome weekend!
Email ThisBlogThis!Share to TwitterShare to FacebookShare to Pinterest
Labels: books, friday fragments, small town