What a great weekend!  Friday night I did laundry since I knew I was going to be busy on Saturday and Sunday.  (This isn't the incredible part, believe me!)
What better way to spend a Saturday than watching high school kids performing?  I'm talking percussion (winter drumline) and winterguard. 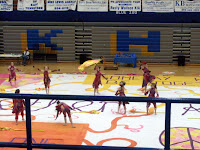 YS plays the baritone in band, trumpet in jazz band, and bass drum in drumline.  This was the first time they have performed, or even had a drumline.  There are 2 classifications for drumline:  1 does a choreographed show, the other doesn't.  YS' drumline didn't march.  There were only two drumlines in their class, and they got the higher score, which means they came in 1st!  They were pleasantly surprised, to say the least.
There were a couple of guards at this competition who were just amazing.  The guard that won the more advanced class had this werewolf theme going on.  Their showmanship was amazing; the way they carried themselves and their expressions were very dramatic.  And the equipment-work that they did!  They had flags and rifles flying all over the place!  There may have been a couple of drops, but not more than a couple.  I don't know if the picture will do them justice: 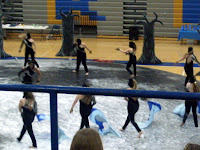 After the performances, while they were waiting for the judge's marks, music played and the kids danced:

That's my shy YS doing the worm.  In front of everybody.  And, he got lots of cheers.
Sunday morning I woke up to rain, then, when I was getting ready to leave for Mass, it started snowing: 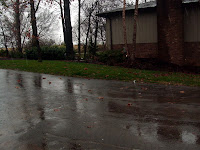 (The white things in the picture are snow.)  The flakes were so big and heavy, that when I left for Mass, I could hear them hit the windshield.
After Mass, one of my sisters (the one who gives me "stuff") went into the big city to go to the "Women Today Expo".  Lots of vendors, lots of free stuff, and....look who I met:

If you don't watch the Real Housewives of Orange County, you won't recognize Gretchen.  Oh, y'all...she was so incredibly nice!  When she came out for the meet & greet, she had her coat on.  I told her that my sister & I figured she had her coat on because she was ready to get out of "hick city", and she laughed and said, "hick city...listen to you."  She went on to say that she really liked it here and that everybody was really nice.  She is even prettier in person, but when she stood sideways she just about disappeared.  She's so incredibly thin, but not in an anorexic kind of way.  As a bonus, here's who else we saw:

Yep, Gretchen's boyfriend, Slade!  I thought he'd be the biggest jerk alive, but he was also incredibly nice.  I told him I'd been watching since the beginning, and he said, "Sorry you've gotten sucked into it."   I think he said that just before this picture was taken.  My nephew's wife is a photographer and was taking pictures at the event, so this was taken with her camera...by my sister.  She was suppose to be in the picture (not my sister...she had no idea who they were), but my sis was having a little bit of trouble with the humongous big girl camera.  So, she didn't get a picture with Slade.  I hated it for her, but am so glad that mine turned out!  And, look:  He has his arm around me!
After the expo, my sister & I went up into the Sunsphere.  This sign was in the elevator: 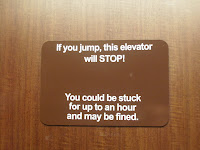 Seriously?  They have to have a sign like this in the elevator?  The view was nice, but it could've been a lot better if the sky wasn't overcast. 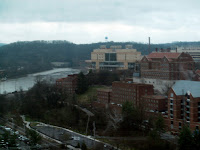 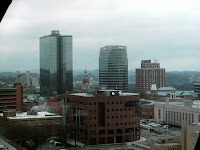 Yep...all in all, a pretty good weekend!  Have a wonderful FAT TUESDAY!
Email ThisBlogThis!Share to TwitterShare to FacebookShare to Pinterest
Labels: band, Real Housewives, snow, YS