The first day of Spring Break was a good one.  It started with Daily Mass, breakfast at Chick-Fil-A with the "old people" (my parents, another couple, and another lady), then the grocery store.  My Adoration Hour flew by.
MS is also on Spring Break.  I talked to him on Friday night and asked when he was coming home, thinking he was going to spend the week at home.  With his mama.  Only he had other plans that he didn't tell us about. His plan was to go to the beach with some friends.  On $49.  This boy just goes with the flow and has a good time...always.  We made him sweat it out, but we did end up letting him go (and CH gave him a little extra money).   I did remind him that if he got into trouble there would be no calling his parents to come and get him since he's over 18.  Let's hope he knows how to behave!

Saturday I met Ashley, my bloggy friend (and IRL friend!) at Horse Haven.  This place is amazing!  They rehabilitate horses who have been abused and/or neglected.  Ashley wrote a post about a horse who got out of the fence; he had the sweetest face!  I had hoped to meet him, but he had been adopted and went home a few days earlier!   I had a good time watching the horses, hearing them talking to each other, and talking with Ashley. I've said this before, and I'll say it again:  She is an incredible young woman!  She volunteers every Saturday evening at Horse Haven.  I've never been around horses (I have ridden a couple of them, though), but if I had, this would definitely be a place to volunteer.  To me, horses are one of the most beautiful animals in the world.

One day last week, these were delivered from Schwanns: 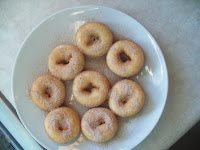 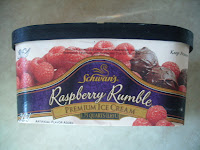 This needs no caption.
I got an e-mail from Jessica at Belleicious saying that I had won a giveaway!  And it was my favorite:  DESSERT!  Thanks, Jessica!  If you're looking for some awesome recipes, Jessica is your girl!
Spring is busting out all over the place!  I love the beginning of Spring in East Tennessee!  Down the road from us, there are a bunch of forsythia that are blooming.  There is a long line of them, where there used to be front yards:

(That is just a small sampling of the bushes.)
The Bradford Pears are in full bloom....there is a long row of them in front of the airport that is just stunning.  Unfortunately, every time I go by a place to stop to take a picture, there are cars behind me or I'm going the wrong way.  Hopefully sometime before they lose their blooms I'll have the opportunity to share.
Do you still have snow on the ground where you are, or is Spring beginning to arrive?
Email ThisBlogThis!Share to TwitterShare to FacebookShare to Pinterest
Labels: flowers, horses, spring, spring break