Stations of the Cross

When you walk into most Catholic Churches, if you look on the walls you will find 14 plaques depicting Jesus' path from his condemnation to death until his burial.  You may know the Stations of the Cross better as "the Way of the Cross".  The Stations of the Cross didn't start until the 17th Century; however, "The devotion originated, historians suggest, with late 4th century Byzantine pilgrims who visited Jerusalem and its holy places"

I hadn't been to the "Stations" since I was little.  I'm not real sure if we made to go or not; I barely remember going.  Last Friday was my first time attending as an adult; I was a little nervous going in because I couldn't remember the routine.  But, once it started, I felt very comfortable.

The Stations begin with the priest in front of the altar for the Gathering Prayer.  He then moves to each plaque, which depicts a  Station.  At each one, the priest introduces the Station then begins with "We adore you, O Christ and we bless you."  The congregation then responds by genuflecting (kneeling briefly on one knee) and responding with "Because by your holy cross you have redeemed the world."  The priest reads a passage from the Bible corresponding with the Station.  The congregation responds with another passage in the Bible corresponding with the passage just read.  (See, Catholics do read the Bible!)  The version that we use is just amazing.  It's a little longer than the ones I've seen online, but very meaningful and pertaining to today.  After the congregation responds with the Bible passage, a song is sung (Stabat Mater) as the priest and the servers move to the next station.  Our parish does a bilingual Stations of the Cross:  one station is in English, the next is Spanish.  After all 14 Stations have been "visited", the priest returns to the altar for the Resurrection.

When you read the list of the Stations below, you may think, "Wait.  That's not in the Bible."  And, you'd be correct. These scenes probably came from the early pilgrims to Jerusalem.   We don't know that Jesus fell 3 times.  We don't know that Veronica wiped Jesus' face.  We don't know that Jesus talked with Mary, his mother.   The Bible certainly doesn't tell us those details.  But, the Bible does tell us that Jesus was weak carrying the cross.  Do you have any idea how much that thing must've weighed?  Since Simon's help was asked for, it only seems logical that Jesus would have fallen.   Mary was at the foot of the cross (John 19:25-27).  Wouldn't she have followed alongside her son?  Wouldn't Jesus have been allowed to speak to his mother for a few seconds?  As for Veronica:  Her story is told in 2nd century version of the Acts of Pilate.  Jesus cured her of a blood disorder, and she went to Pilate to plead Jesus' innocence at his trial. "Later versions of the story from the 4th or 5th century say that Veronica possessed a cloth imprinted with the face of Jesus. Western pilgrims returning to Europe passed her story on. As the Stations of the Cross developed in late medieval times, Veronica was remembered at the 6th Station: she wipes the face of Jesus on his way to Calvary and he leaves an image of his face on her veil. A healing relic, impressed with the image of Jesus' face, which came to be known as "Veronica's Veil," was honored in St. Peter's Church in Rome as early as the 8th century" .

This devotion is absolutely beautiful.  There is a lot of standing and kneeling, but it is just an awesome thing.  You feel Jesus' pain and the pain of his followers.  One of the few things I have of my maternal grandmother's is this plaque of the Stations: 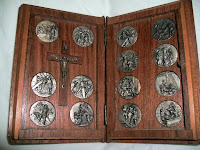 The Stations of the Cross: