Meatless Friday: Or Is It?

FEAST OF THE ANNUNCIATION
The following is the biblical background for this Feastday.


Luke 1:26-38
In the sixth month the angel Gabriel was sent from God to a city of Galilee named Nazareth, to a virgin betrothed to a man whose name was Joseph, of the house of David; and the virgin's name was Mary. And he came to her and said, "Hail, full of grace, the Lord is with you!" But she was greatly troubled at the saying, and considered in her mind what sort of greeting this might be. And the angel said to her, "Do not be afraid, Mary, for you have found favor with God. And behold, you will conceive in your womb and bear a Son, and you shall call His name Jesus. He will be great, and will be called the Son of the Most High; and the Lord God will give to Him the throne of His father David, and He will reign over the house of Jacob for ever; and of His kingdom there will be no end." And Mary said to the angel, "How shall this be, since I have no husband?" And the angel said to her, "The Holy Spirit will come upon you, and the power of the Most High will overshadow you; therefore the Child to be born will be called holy, the Son of God. And behold, your kinswoman Elizabeth in her old age has also conceived a son; and this is the sixth month with her who was called barren. For with God nothing will be impossible." And Mary said, "Behold, I am the handmaid of the Lord; let it be done to me according to your word." And the angel departed from her.

Some interesting facts about this Feastday:
~ The Annunciation has always been celebrated exactly 9 months before Christmas.
~  The Feast of the Annunciation is not a Holy Day of Obligation (days when Catholics are obligated to attend Mass).
~  25 March, in Western Countries, used to be the 1st day of the New Year, until 1752 when secular calendars used 1 January as New Year's Day.
~ This day was also called "the Feast of the Conception of Jesus", as well as "the Feast of the Last Judgement".

This was the day when Mary said "yes".  This was the day that Jesus became flesh in her womb.  This is the day when one of our most beloved prayers began:  "Hail Mary", which begins, "Hail, Mary, full of grace, the Lord is with thee."  The Annunciation is also the first Joyful Mystery of the Rosary.

Could you imagine if this happened in modern times?  Would it be a reality show?  Would God find someone to say "yes"?  Would this happen in the USA or somewhere else in the world?  Something to think about, for sure.

I think I like this picture of The Annunciation the best out of all of the ones I looked at: 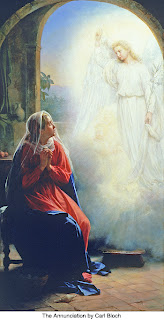 This is how I imagine Mary to feel; she has a scared look about her.  She must've been terrified when she first saw the angel, only to be comforted knowing that God would be with her.  It's just unimaginable, but I guess that's what faith is all about, right?
Email ThisBlogThis!Share to TwitterShare to FacebookShare to Pinterest
Labels: Catholic, Meatless Friday