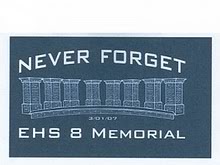 It seems like the tornado event in CH's hometown was an eternity ago.  The severe weather we had yesterday was a brutal reminder of what a witch Mother Nature can be.

It's hard to believe that just 4 years ago, a tornado took the lives of 8 people, with 6 of those people being young men and women who had just begun to live.  A school is suppose to be a safe place; the 6 who died were seeking refuge in the "third hall".  There were reports of angry parents wanting to know why school wasn't let out early because of the warning of bad weather.  Honestly, if the kids had been sent home, I think there would have been many more lives lost that day.  We all know how kids are:  they would have gone to a friend's house (that may not have been standing after the tornado) and played video games, or have been at the local hangout.

Life has gotten back to normal in that town, a "new normal", if you will.  Life has gone on...different from before, but it has continued.  And the town has thrived.   And they have not forgotten.  If you've never been to the town, upon first glance you wouldn't notice anything.  My MIL has a "new and improved" biergarten, a new house next door and across the street, and my MIL's plants are growing.  But if you really look, the evidence is still there.  Little reminders of what happened 4 years ago.

Below is a video from the first day of school in August.  That was the first day that any of the students had a school to call their own:  they had been going to school at the jr. college in town.  Take special notice of the Wildcat on the floor in the foyer; it's the same one that was in the old school.  Just in case you can't make out what the retired teacher is saying, she says that "no one walks on the wildcat".  When President Bush visited the school after the tornado, the president of the SGA grabbed his elbow as he was about to walk on it, and told him, "nobody walks on the wildcat."


My heart goes out to those families who lost loved ones. Please remember them today as you go through your daily routine.

For last year's post on this, please go here.
Email ThisBlogThis!Share to TwitterShare to FacebookShare to Pinterest
Labels: memorial, tornadoes