Marching into the Hodgepodge

1. My real life friends came through with another question this week so thank you real life friends. When you've eaten in a restaurant do you complete their comment card? Do you take online surveys highlighted at the bottom of store receipts?
If the service and food was exceptionally good (or bad), we'll fill one out.  Sometimes I take the surveys, sometimes not.  I'm more likely to take the time to do it if there's a possibility of winning something.
2. The (US) ban on women in combat was lifted at the end of January. It will probably be next year before specifics are worked out, but its been reported over 200,000 front line positions will eventually open up to women.  Your thoughts?
My initial thought is:  Hey, if that's what they want to do, then more power to them.  However, I don't think a woman should be put in a man's spot just for the sake of having a woman in that spot.  If she's truly the best person to be there, then put her there.  And, if the women are vying for that spot, they should be held to the same standards as the men.  When CH went to Airborne School, the females had different standards:  no pull-ups were required, and got to do "girls' pushups".
3.  In looking back at all the blog posts you've written, what's your favorite posttitle?
I looked back at my titles and realized how uncreative I am with them.
4. What's worse-overly permissive parents or overly protective parents?  Did your own parents lean more to the permissive or the protective category?  If you're a parent where do you fall?
I'll go with overly permissive parents.  Mine leaned more toward the over protective, but not because I thought they were; they were just big on doing the right thing and acting the right way.  That meant having a handle on where we were and what we were doing.
I think we're somewhere in the middle.  I tried to make sure the boys grew up in a structured environment, but I think it's important to let them have some independence and make their own choices.  I've seen people just go hog-wild once they went to college because their parents had the apron strings so tight.  Then again, I know some people who were strict on their kids only to have them continue to live the straight and narrow once they left home.  I don't know how they did it. I wish kids came with an instruction booklet.
5.  Candlelight-moonlight-firelight-bright lights in the big city...which one's your favorite?
Moonlight.  When we were in the Keys, there was a full moon a couple of nights, and it lit up the whole campground.  We didn't even have to use any kind of lights to get around.  It was just beautiful. 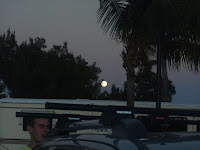 6. Dr. Seuss's birthday was celebrated on Saturday. What's a favorite book you remember (Seuss or otherwise) from your own childhood?  Did books play an important role in your growing up years? Explain.
I grew up loving books.  I really liked "The Borrowers", Nancy Drew, and "Flowers in the Attic".
7.  To quote Dr. Seuss...
"From there to here, and here to there, funny things are everywhere."
from One Fish Two Fish Red Fish Blue Fish

Share something funny you've recently read, seen or heard.
This is kind of long, but it sure had me laughing!  (Warning:  there are a couple of words in there that may be offensive to some)

8.  Insert your own random thought here.

No school today!  As of 6:00 a.m., there is just a dusting at my house, but I work for the county.  That includes the entry to the Great Smoky Mountains, so we're always pulling for the roads up that way to be just a little bit icy.  YS has school, but I'm not sure if CH is going to go into work or just work from home today.  I'm looking forward to a day of catching up with everybody out there in blogland, and some reading.  Oh, and maybe a few more episodes of "Cracker".  (If you missed it, I talked about it here toward the end of the post.)  In fact, I think a pajama day is in order!
Email ThisBlogThis!Share to TwitterShare to FacebookShare to Pinterest