I was able to get some decent pictures of the "duck couple" that I mentioned in the Wed. Hodgepodge a couple of weeks ago: 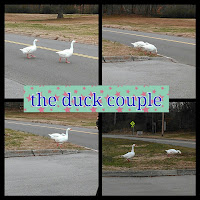 The one with the deformed wing is pecking on the ground in the bottom right picture.  They are so sweet.

We had some snow on Thursday, but when it finally stuck, it didn't stay around for long.  As in literally for 5 minutes. 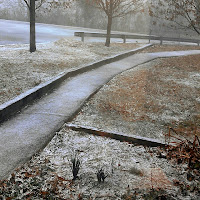 We have been going to a local pizza place for dinner on Fridays, but decided to stay in and have dinner at home last Friday.  I was thrilled that our cable provider finally decided to add CBS to On Demand!  I got caught up on NCIS, Big Bang Theory, and Rules of Engagement.

For the past 2 Saturdays, I've made some materials for school.  Last week I made these: 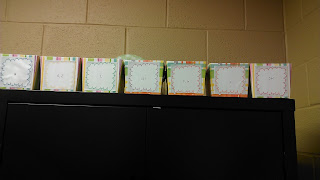 I wish I could credit for the idea, but I'm just not that creative!  I found the boxes at the dollar store, then printed out the borders with sounds that I usually work on.  There are pictures in the boxes, so all the students have to do is pull out a picture, say it, then glue it onto the activity we're doing for that day.  I'm using them today for the first time.
This past Saturday, I printed out a couple of things to put on my walls at both schools.  If you're a teacher, or you homeschool, check out www.teacherspayteachers.com.  There is a lot of material that's free; the only downside is having to use ink to print it out.  Plus, I put my stuff on cardstock and then laminate it using the laminating pockets.

I practiced making cookies on Saturday for my in-laws' anniversary party in April.  I was having trouble getting my cookies to roll out evenly, so I looked online for help.  One baker  has a special board that she uses.  It looks like a simple board with wooden boards on the sides that she can move to different levels, depending on how thick she wants her cookie.  For $130, I say:  No, thanks.  Some of the commenters mentioned getting dowels and using those.  I went to a crafts store and found some small wooden boards that are just the size I need.  I set 2 of them down, and put the dough in between. 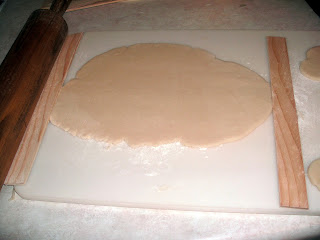 Then I rolled the rolling pin on the boards, and it worked!  My cookies came out uniform in thickness. 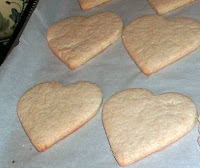 I found a glaze recipe that was similar to the one I've used before, but this one used vanilla extract, butter flavoring, and almond flavoring.  (I didn't have any almond, so I used lemon instead.)  I went back to see what the different ingredients were, and it turned out that my original recipe uses milk; the new one uses water.  The new one was a little more difficult to spread, and it tasted much sweeter...too sweet, really. 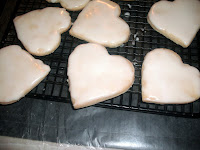 So, next batch I make, I'm going to:  1) use my stone since it bakes more evenly, 2) use my original glaze recipe, and 3) add the extra flavorings.  As a trial, I'm going to do half of the cookies with almond flavoring and half with lemon to see which one tastes better.

Sunday was grocery shopping, a little more baking (tortilla strips for MS & muffins for this week's breakfasts), and Mexican for dinner with one of my sisters & her husband.  We talked about our trip to the Keys for next Christmas Break.  I also watched a few more episodes of a British show called "Cracker".  The guy who played Hagrid in Harry Potter (Robbie Coltrane)  is a psychologist who helps out the local police department solve murders. It was on for 5 seasons, and ended in 2006.   A friend and coworker recommended it to me, and I'm hooked.

You've probably already seen this, but just in case you haven't:  The original Harlem Shake: